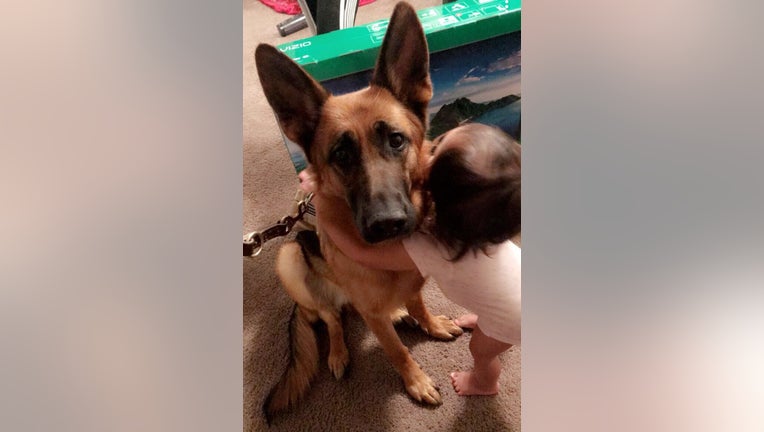 Lexi has been a gamechanger for Conor Cote and his family. (Supplied)

BUFFALO, Minn. (FOX 9) - A veteran in Buffalo is grateful for his community after they came together for something that he says has changed his life.

Conor Cote has been out of the Marines for a few years now but he said it wasn't easy. He posted on the Buffalo Community Facebook page, hoping to get find resources. And he ended up finding so much more than he ever imagined: A service dog that is his perfect match.

"We’re still learning together too, but it’s amazing how far we’ve come along since I first got her," Cote says of his service dog Lexi.

He got her just two months ago after years of searching for help.

"'Am I going to be this way 10 years down the line?' I need to figure out how to get over this," he recalled.

Cote served in the Marines Corps for four years. Within months of his return home, two of his battalion members had committed suicide.

He ended up reaching out on Facebook to his Buffalo community.

"I was trying to find a meeting, or someplace I could find a good connection again, or what now," said Cote.

He says the response to his post was overwhelming. Within days, he was connected with fellow veterans and with the founder of the Invisible Wounds Project Russ Hanes.

"I can’t count the number of people who I know who are struggling in different ways or who have struggled and you don’t get through it without some kind of an outlet, and we want to provide that," said Hanes.

Hanes connected Conor with V.E.T. Service Animals and they brought him with Lexi.

"Our whole family has been blessed here, and it all started with that post to the Facebook page,” said Cote.

Cote says that Facebook page, full of people, changed his life and showed him that no matter what, he’s not fighting alone.

Cote says Lexi helps with his anxiety, and depression, even waking him up if he has bad dreams. Both Cote and Hanes say, if you're struggling or you know someone that's struggling, don't hesitate: Reach out now.