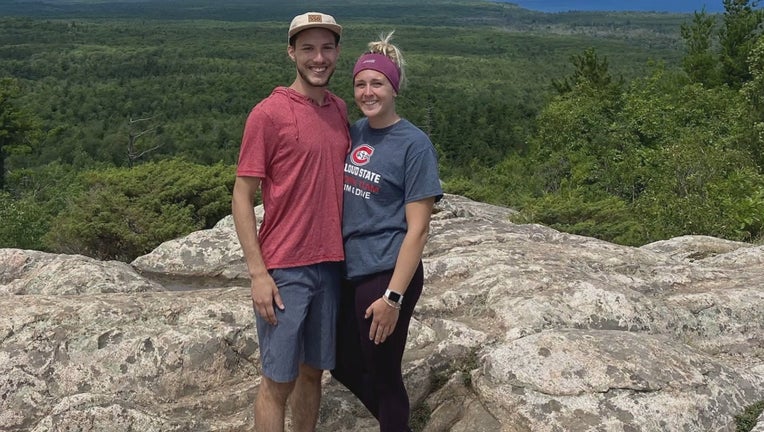 (FOX 9) - The captain of the St. Cloud State swimming and diving team is being hailed as a hero after saving the lives of three people in Lake Superior on Sunday.

Marena Kouba and her boyfriend are being credited for coming to the rescue of a man and two young kids near Little Presque Isle in Michigan's Upper Peninsula.

Kouba, a life-long competitive swimmer, had her skills put to the test last weekend. Kouba and her boyfriend Dayton Nash were on vacation when their trip took a turn after venturing into a no swimming zone in Lake Superior.

"As we went out, halfway to the island and I said that I wanted to turn back because of how the waters were," explained Nash. "That’s when I heard the scream."

A 10-year-old girl, an 11-year-old boy and their uncle were caught in a rip current more than 150 yards away.

"I didn’t really have time to think," recalled Kouba.

Nash swam back to shore to alert authorities while Kouba went in for the rescue.

"I had them lay on their backs so that they were floating and looking up at the sky," she said. "I just wanted them to focus on their breathing."

Pulling all three with one hand while paddling with the other arm and kicking with her legs, Kouba was able to tow the trio back to shore alive after more than ten minutes in the water. Kouba, a Sartell native, emerged as a hero.

"I see firsthand how hard she works at swimming," said Nash. "Obviously, she's the captain, but I'm so happy to see that all of her hard work has not only paid off in the pool but also in real life."

"I'm just so happy that it all ended up ok and that we were both there to help out where we could," added Kouba.

The area where the rescue took place is known for being very dangerous. We are told there are "no swimming" signs posted and there is several memorials recognizing people who have died in the water. This incident serves as another reminder for visitors to be careful.