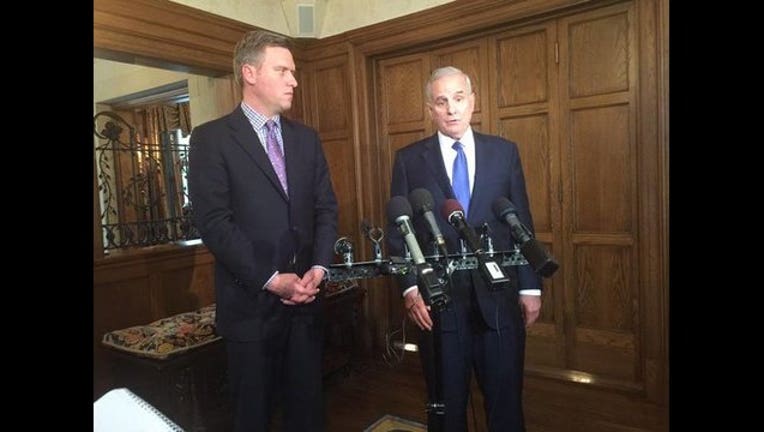 ST. PAUL, Minn. (KMSP) - Minnesota Gov. Mark Dayton had set a Thursday deadline for an agreement on tax relief and bonding bills to call a special session. But deadline day has come, and the governor and House Speaker Kurt Daudt remain far apart – about 2,500 miles and 80 degrees to be specific.

Gov. Dayton sent a letter to Speaker Daudt on Thursday, addressed to Frenchman's Reef & Morning Star Marriott Beach Resort in St. Thomas, U.S. Virgin Islands. The governor wrote, “it is clear that you keep looking for excuses to avoid a Special Session on the Tax Bill or Bonding Bill.” Dayton added, “I have not spoken with you for almost two weeks, since you have been in Hawaii and the Virgin Islands.”

The governor and legislative leaders met Dec. 2 to work toward a special session deal that would help MNsure customers deal with big insurance rate spikes, and to implement the tax relief and bonding bills that went unfinished during the regular session back in May. Despite months of negotiations, the deal is not done yet.

House Committee Chairs and members have been working diligently to come to an agreement with your staff and commissioners on the Tax, Bonding and Health Insurance Relief bills. At our December 2 meeting, we agreed to empower our members and your commissioners who know these subject matters best. Per that framework, our issue area experts have been meeting almost daily with either members of your administration or legislators from the other three caucuses. I am thankful for their continued effort towards reaching consensus.

Your letter Tuesday outlining new additions to the bonding bill and drastic changes to the tax bill showed a significant departure from the progress I thought we had made.

Throughout the interim, we negotiated in good faith with you to bring the bonding bill even further in line with your requests. This week you took a step backward, undoing months of work by all parties. Projects that were set aside long ago have reemerged in your new proposal. For example, six months ago we agreed to not pursue MSOP Phase 2, but you are now demanding that project along with items never before included in your requests or discussions like Gateway Corridor BRT. You also wrote your intention is to use Appropriation Bonds for your requests which have much higher interest rates than General Obligation Bonds and therefore a greater cost to Minnesota taxpayers. Lastly, in your new proposal for the transportation portion of the bonding bill you preserve earmarks for your projects while stripping out our priorities that are immediately awaiting funding.

As it relates to the tax bill, Republicans and Democrats worked together to craft legislation that earned more than 89 percent of the legislature’s support. While the state has had a surplus for more than two years, Minnesotans have not and they are rightfully wondering when they will receive tax relief. Minnesota parents are desperately seeking relief from child care and college tuition expenses, farmers await ag-land property tax relief, and veterans are counting on tax credits to improve their quality of life. Your new proposal forces them to wait until 2018 to see that relief.

Our caucus remains committed to providing Minnesotans with both short-term relief and long-term solutions for the health insurance crisis. House Republicans have been working with your administration and legislators from all caucuses to move forward on a solution for health insurance relief and I have instructed our members to continue those discussions. If we agree and enact a solution during special session, your administration informs us Minnesotans could start seeing those benefits as early as March or April 2017.

While I remain hopeful all sides can come to an agreement, your recent letter was a setback to a solution all sides can accept. If you are seriously committed to a special session, I request that you back away from these new demands (which were not discussed at the December 2 meeting) and permit your commissioners and staff to finalize the bills with our members and legislators from the other caucuses.

In response to your December 15, 2016 letter, it is clear that you keep looking for excuses to avoid a Special Session on the Tax Bill or Bonding Bill. I sent you my proposed legislation last Tuesday and set a deadline of 5:00 pm this afternoon for an agreement. Now, two days later and less than five hours before my deadline, you respond with more obfuscation. If you don't like one or two items in the Bonding Bill you could have said so two days ago and we could have resolved those differences. Otherwise, the removal of the cash and the earmarked highway projects conforms to what I and others heard you say in our December 2 meeting.

I don't know what you 're talking about in regards to the Tax Bill changes, except if you had any communication with your Tax Chair, you would know that Commissioner Bauerly and he have been discussing for months the necessity to change effective dates in order to implement the bill.

I have not spoken with you for almost two weeks, since you have been in Hawaii and the Virgin Islands. You have not bothered to contact me to express your concerns. You have provided little leadership to your own Caucus Members or to our group of Caucus Leaders, who have been attempting to bring these bills to a Special Session next Tuesday.

If I do not reach an agreement with you by 5:00 pm CST today, I will not support taking up the Tax and Bonding Bills next Tuesday. That leaves the question: Are you agreeable to a Special Session next Tuesday, December 20, to provide health care premium relief to 121,000 Minnesotans? I will await your response to that question and will need to receive it by noon tomorrow, if we are to proceed to a Special Session next Tuesday.