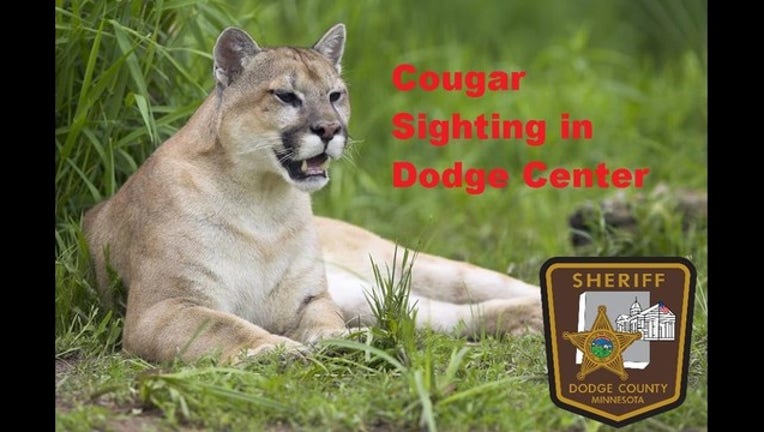 DODGE CENTER, Minn. (FOX 9) - Authorities in southern Minnesota are warning residents about a cougar that has been seen roaming the area near Dodge Center.

The Dodge County Sheriff’s deputy located the cougar in the field north of North Street and Airport Drive Tuesday night after receiving a report about a sighting of the animal in a nearby backyard. Residents in the area reported seeing the cougar over the past few days.

Cougar sightings are rare, but the sheriff’s office is reminding people to remain cautious, particularly while using the parks and trails in the area.

Most cougars will avoid confrontation, but if you do encounter the cougar, the DNR advises people to face the cougar directly, raise your arms to make yourself appear larger and speak loudly and firmly. Do not run, crouch or lay on the ground. If it attacks, fight back aggressively. Pick up small children immediately. Cougars often will retreat if given the opportunity. Always leave the animal an escape route.

Anyone who sees the cougar is asked to call 911 to report the sighting immediately. If you can safely do so, try to take a photo of the cougar so the sighting can be documented for the DNR.