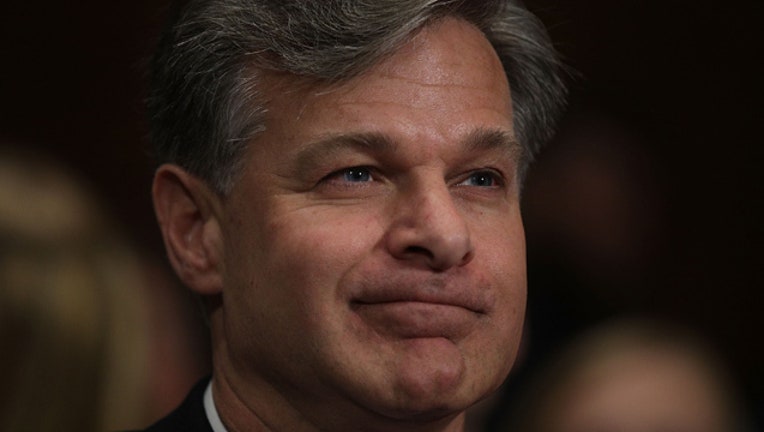 The vote was 92-5 for Wray, a former high-ranking official in President George W. Bush's Justice Department who oversaw investigations into corporate fraud. Wray, 50, inherits the FBI at a particularly challenging time given Trump's ousting of Comey, who was admired within the bureau.

"This is a tough time to take this tough job," Sen. Amy Klobuchar, D-Minn., said during a relatively low-key Senate debate of the nomination. "The previous FBI director, as we know, was fired because of the Russia investigation. The former acting attorney general was fired. And we've had a slew of other firings throughout the government over the last few months."

Republican Sen. Ben Sasse of Nebraska said after the vote: "Chris Wray will bring character and competence to a city that is hemorrhaging public trust."

Wray won unanimous support from the Senate Judiciary Committee last month, with Republicans and Democrats praising his promise never to let politics get in the way of the bureau's mission.

Asserting his independence at his confirmation hearing, Wray said: "My loyalty is to the Constitution and the rule of law. Those have been my guideposts throughout my career, and I will continue to adhere to them no matter the test."

Trump roiled Washington on May 9 by firing Comey in the midst of his 10-year term as the FBI chief and as the law enforcement agency was investigating Russia's role in the election and possible ties to Trump campaign officials.

Wray has worked on white-collar crime and regulatory cases as a partner at the King & Spalding law firm. From May 2001 to May 2005, he held various high-ranking positions in the Justice Department, rising to the head of the criminal division in September 2003. He also served as principal associate deputy attorney general.

He was a federal prosecutor in the U.S. attorney's office for the Northern District of Georgia from May 1997 to May 2001. Wray had represented New Jersey Gov. Chris Christie in the so-called Bridgegate scandal.

Wray is a graduate of Yale University, where he also received his law degree in 1992.

"Mr. Wray possesses the skill, the character and the unwavering commitment to impartial enforcement of the law that we need in a FBI director," said Sen. Chuck Grassley, R-Iowa, chairman of the Judiciary Committee.

The top Democrat on the panel, California Sen. Dianne Feinstein, said Wray "has the strength and fortitude to stand up and do what it is right when tested."

She added, "We need leaders with steel spines, not weak knees, and I am hopeful that Mr. Wray will be just such a leader."

Commenting on the vote, Sen. Lindsey Graham, R-S.C., said, "Today's bipartisan show of support is indicative of Wray's professionalism and commitment to independence. I have no doubt the FBI is in good hands with Mr. Wray at the helm."

Voting against the nomination were five Democrats who have opposed many of Trump's nominees: Kirsten Gillibrand of New York, Elizabeth Warren and Ed Markey of Massachusetts, and Ron Wyden and Jeff Merkley of Oregon.