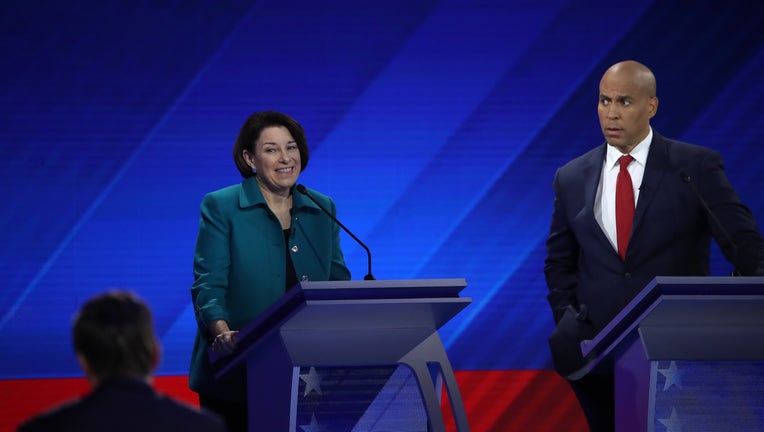 HOUSTON, Texas (FOX 9) - After other candidates questioned his mental wellbeing on Thursday, Senator Amy Klobuchar stuck up for Joe Biden, comparing a debate attack by Julian Castro to "something Donald Trump might tweet."

Biden, the Democratic frontrunner at this point, was on the receiving end of jabs on his age and memory during the third Democratic debate. The questioning followed gaffes in recent weeks, like suggesting he met with Parkland survivors while serving as vice president, which has led to some speculation about his memory.

Dems face off in Houston for 3rd debate

Ten hopefuls are meeting Thursday in Houston. Former Vice President Joe Biden is at center stage along with two of his closest rivals, progressive Sens. Bernie Sanders and Elizabeth Warren.

Castro was first to strike on that topic on Thursday. During a back-and-forth between the candidates, Castro criticized Biden for making contradicting statements on his health care plan, hinting that Biden might not be able to remember his own policy.

Following the debate, Senator Cory Booker piled onto the mental questioning, saying, "There’s a lot of people concerned about Joe Biden’s ability to carry the ball all the way across the end line without fumbling."

"I just thought, this is not cool," she said. "Just because, I think you can have policy differences -- and I was one of the few ones up there that was willing to take on Bernie on some of these things, even though we work together all the time. But I would never do it personally. I thought that was so personal and so unnecessary."

"You got to unite," Klobuchar added, saying that's how the Dems took the House in 2018. "We united behind candidates. We didn't treat each other like Donald Trump... I believe we don't only have to change policies. We have to change the tone in our politics. When a statement like that is made, it doesn't feel like that. It feels like something Donald Trump might tweet out."

Biden faced more scrutiny during the debate when he encouraged parents to play record players for their kids. The remark came as Biden was discussing education for kids. During the commentary, Biden was arguing for simple approaches to learning for children.

"Play the radio, make sure that the television -- excuse me," Biden said. "Make sure you have the record player on at night. Make sure that kids hear words."

But the suggestion that parents should turn to the old technology had many on social media mocking Biden.

Despite those questions, Biden still holds a significant lead in polls, with a recent, pre-debate Reuters poll putting BIden 9.5 points ahead of Bernie Sanders and Elizabeth Warren.