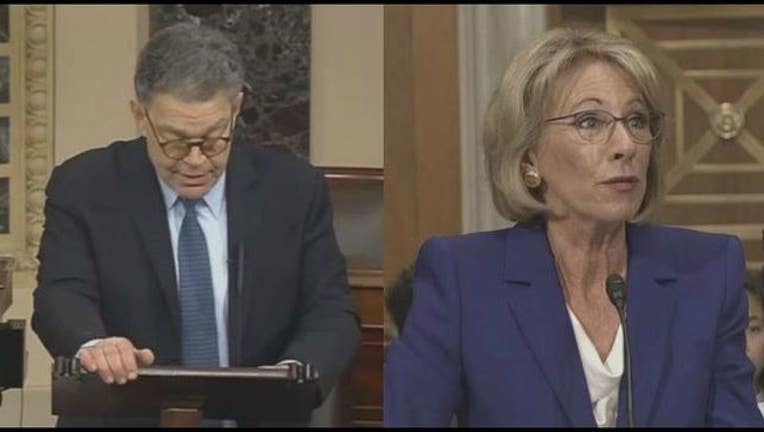 The Senate was divided and Democrats had an all-night speaking marathon against DeVos nomination. Those not in favor of DeVos believe she has a lack of experience in public education.

On Monday night, Senator Franken delivered a speech from the Senate floor urging Republican colleagues to vote against DeVos.

Sen. Franken released this statement following the Senate’s confirmation of DeVos as Secretary of Education:

“One of the most important jobs in our government is the Secretary of Education, who directly oversees the policies that children, teachers, school administrators, and entire communities depend on,” said Sen. Franken. “It’s not a job for amateurs who don’t know the first thing about education. I voted against the nomination of Betsy DeVos, a billionaire Republican donor, because she is the most incompetent cabinet-level nominee I have ever seen. Last night, I urged my Republican colleagues to oppose her nomination, because if we cannot set party loyalty aside long enough to perform the essential duty of vetting the President’s nominees, then I don’t know what we are even doing here. Betsy DeVos has demonstrated that she is fundamentally unqualified to lead the Education Department, and it’s a shame that Republicans voted to confirm one of their major donors instead of looking out for our children.”

“I joined with Democrats and Republicans, including Senators Susan Collins and Lisa Murkowski, in opposing Betsy DeVos’s nomination for Secretary of Education. My mom was a public school teacher who taught second grade until she was seventy-years old. She taught me the value of a high-quality public education for all students, and I am concerned Ms. DeVos does not share that value. As one example, Ms. DeVos’s comments during her hearing indicated that she may not support the critical protections for children with disabilities provided by the landmark Individuals with Disabilities Education Act. Now that she has been confirmed, it is important that we hold Ms. DeVos accountable in upholding the value of education for all students.”