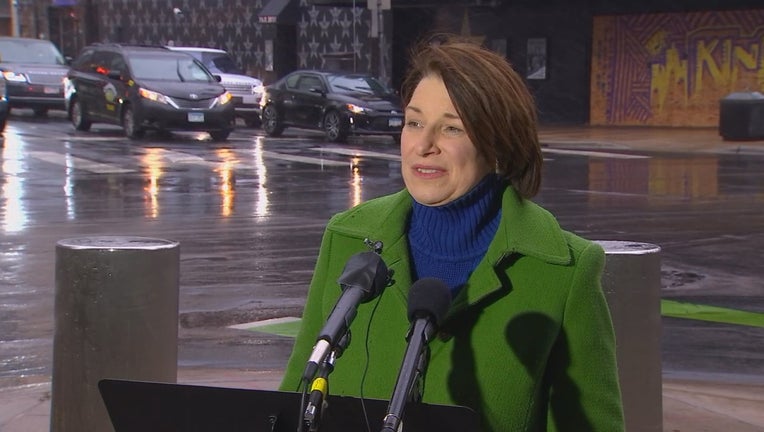 In a statement released on her personal blog, Klobuchar said the cancer was detected in February during a routine mammogram at the Mayo Clinic in Rochester. After the discovery, she had a biopsy at the Piper Breast Cancer in Minneapolis and later received a call in Washington D.C. amid the busy Senate schedule, confirming she had stage 1A breast cancer.

"When I first found out I couldn’t believe it and I had to go and vote an hour later," said Klobuchar.

After a number of tests, Senator Klobuchar returned to Mayo for a lumpectomy, removing the cancer from her right breast. From there, she flew back and forth between Washington to Minnesota, where her husband drove her to radiation appointments until May. She said her first radiation appointment happened two days after her father died. Unable to lift much following treatments, the senator recalls her suitcase becoming an added challenge.

"People didn’t know who I was when I had the mask on and some guy would jump up, ‘Hey let me put that up there.’ And had no idea I had cancer. And those sort of things you don’t forget," she said.

"Those who receive screening are half as likely to die from their breast cancer compared to those who don’t undergo screening," Dr. Jessica Kuehn-Hajder, a radiologist with M Health Fairview.

Almost immediately, Klobuchar made sure to get her daughter Abigail screened. She also encourages others not to wait for a cancer diagnosis to change perspectives.

"You are able to step back and think about what really matters in your family," said Klobuchar. "And also have a renewed purpose and not quite sweat the small stuff as much."

It's recommended women with average risk start getting mammograms at 40 years old and at 45 start getting them annually. As of last month, doctors tell Klobuchar she now has no greater chance of developing cancer than the average person.