Record-setting gas prices have sent Minnesota politicians scrambling for something they can do to address voters' concerns about inflation ahead of this fall's midterm elections.

(FOX 9) - Record-setting gas prices have sent Minnesota politicians scrambling for something they can do to address voters' concerns about inflation ahead of this fall's midterm elections.

Prices in the Twin Cities surged to a record $4.59 per gallon on Monday. Locally, the cost for a gallon of regular gas is up $1.61, or 62% from this time a year ago, AAA data indicates. Problem is, politicians can't do much about gas prices that are largely set by international market forces, and the few levers they can pull have political complications.

In his race against DFL Gov. Tim Walz, Republican candidate Dr. Scott Jensen is proposing to repeal Minnesota's minimum markup law and suspend the state's gas tax, moves he says would bring down the cost of gas by 50 cents per gallon.

"If we remove the statute that fixes prices, it would save 20 cents," Jensen, a family physician from Chaska, says in a new campaign video. "If we remove the Minnesota portion of the gas tax, that’s another 30 cents."

At current prices, Minnesota law requires retailers to sell gas for eight cents more than they bought it.

That law took effect in 2001, following an intense lobbying battle detailed by the Wall Street Journal. Walmart had recently entered the gas station market and was selling fuel at a loss to attract customers to its stores.

Lance Klatt, executive director of the Minnesota Service Stations and Convenience Stores Association, said his group would oppose repeal efforts. Klatt pointed to a study from researchers at the University of Wisconsin-Whitewater that showed drivers paid more for gas in states where there were no laws banning below-cost sales.

The Minnesota Petroleum Marketers Association has not had a chance to talk with Jensen about the issue, said the group's executive director, Tim Gross, who declined comment until a meeting could happen.

In response to a question from FOX 9, a Walz spokesman did not say the governor's position on the markup law. Instead, Walz's campaign criticized Jensen for opposing an $8 billion package of tax cuts and new spending that failed to pass during the Legislature's regular session.

"Gov. Walz has been pushing for a bipartisan deal that would provide financial relief for Minnesotans facing rising prices," Walz campaign manager Nichole Johnson said in an email. "If Scott Jensen cared more about helping working families than he did about politics, he wouldn't be asking Senate Republicans to kill that deal."

Jensen has said he would've liked lawmakers to pass the tax cuts, which totaled half of the $8 billion, along with certain spending measures, such as for police and assisted-living facilities.

Jensen isn't the first to propose a suspension of Minnesota's 28.5 cent per gallon gas tax.

Earlier this year, five Democratic members of the Minnesota House proposed a gas tax holiday running from Memorial Day to Labor Day. At the time, Jensen's fellow Republicans blasted the idea as an "election year gimmick."

The proposal never passed the House or Senate, meaning Minnesota did not join five other states that have suspended their gas taxes. 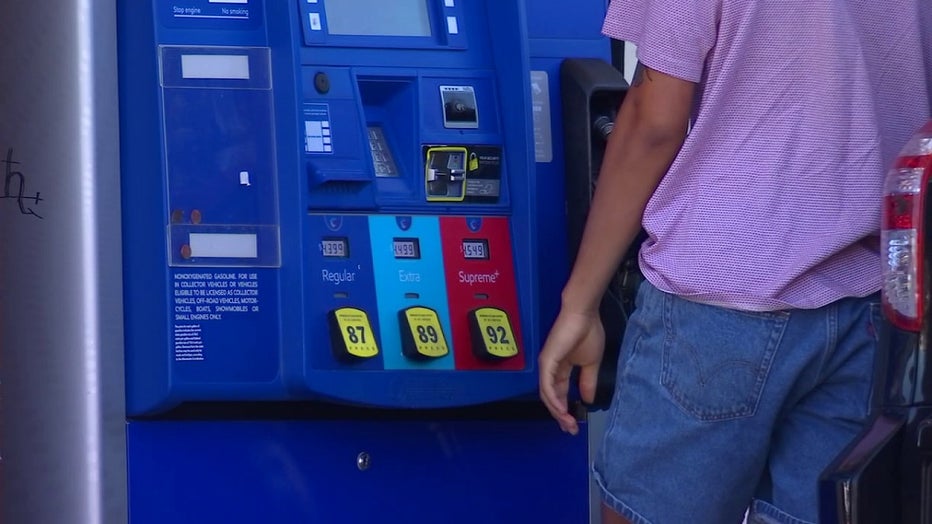 Minnesotans are facing record-high gas prices with no relief in sight. (FOX 9)

Walz has called on Congress to suspend the federal 18.4 cent per gallon gas tax and said he would've signed a state gas tax holiday into law. But this session, the governor favored his own proposal for rebate checks of $500 per adult as the best use of the state's multi-billion dollar budget surplus.

"It's quite a few fill-ups you could get for $1,000 (per adult couple)," Walz told reporters during a news conference at a gas station in March.

At the time, Walz raised concerns about the budgetary impact of a gas tax holiday. It would cost $70 million per month to the state's road-building fund, he said.

Jensen said he would backfill the loss by shifting all revenue collected from the state's tax on auto parts to road construction. In turn, that would cause a gap in other state programs. By state law, 50 percent of the auto parts sales tax revenue currently goes to roads and the other half to the general fund.

In sum, Jensen says the difference between his proposal and Walz is 75 cents per gallon. Jensen says his plan would save a Minnesota household "approximately $1,000."

Those figures rely on several assumptions, as illustrated below for a driver who uses 15 gallons of gas per week.

If Minnesota's gas tax were suspended, that driver would save about $230 per year, or $460 per couple.

If the Legislature repealed the state's minimum markup law, there's disagreement over the impact to consumers. If gas stations uniformly lowered their prices by 8 cents, the same driver would save $60 per year, or $120 per couple.

Jensen's figure adds a third variable: Walz's 2019 proposal to increase the state's gas tax by 20 cents per gallon. Doing so would've added $156 per driver, or $312 per couple.

When reporters asked Walz earlier this year about the political consequences of that 2019 plan, the governor said he proposed it when gas prices were less than $2 per gallon and there was no hope of a boost in federal infrastructure spending like the law Congress ultimately passed in 2021.