Sanders, visiting Minnesota for the second time this year, told a crowd of several thousand supporters at Williams Arena that Trump was the most corrupt president in U.S. history. Sanders supporters began loudly chanting about Trump, “Lock him up!”

Sanders, Omar call for “mass movement” in 2020 against President Trump

“This is a president who deserves to be impeached and will be impeached,” Sanders said, speaking over the chants.

Sanders said people view him and Omar – who has drawn criticism for her comments about Judaism, Sanders’ religion – as  “an odd political couple.” But he said the two “share a common link” as descendants of people who fled violence and poverty to immigrate to the U.S.

Sanders has said his father left Poland in the 1920s. Omar was a refugee whose family escaped Somalia when she was a girl.

“There is no member of Congress in the modern history of this country who has been subjected to more vitriolic, more hate-filled, more racist attacks from Donald Trump and some of his supporters than this extraordinarily brave congresswoman,” Sanders said of Omar.

Speaking before Sanders, Omar called for a “mass movement of the working class” in the 2020 election.

“I am beyond honored and excited for a president who will fight against Western imperialism and fight for a just world,” she said of Sanders.

Omar drew criticism this week for voting “present” – not in favor – of a House resolution recognizing the Armenian genocide of the early 1900s. She appeared to indirectly reference that vote Sunday. 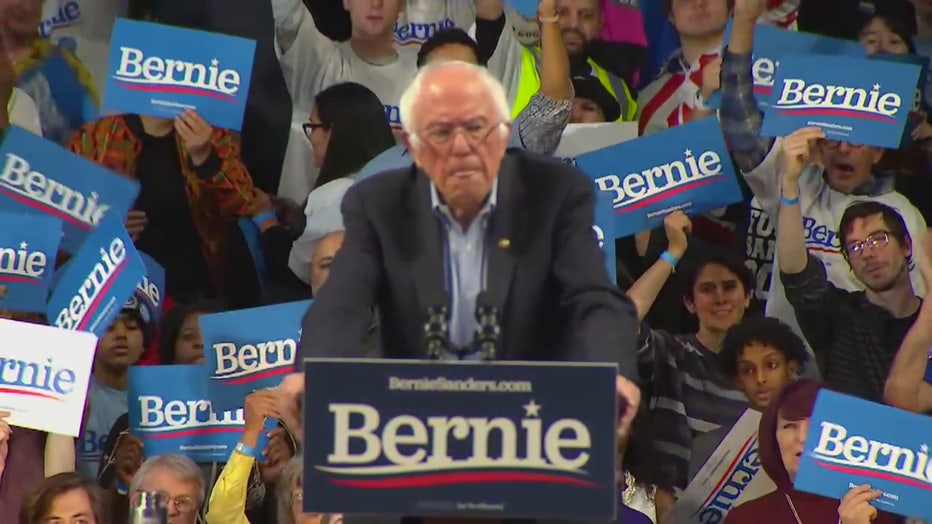 Sanders spoke to the crowd of thousands at Williams Arena in Minneapolis.

“The fight for human rights is undeniable,” she said during her speech. “When we recognize injustices of the past and present -- whether it is genocide against Jewish people, Armenians, Rwandans, Bosnians, Native Americans or more, we recognize – we realize –that recognition isn’t about punishing our political foes, but leading within a moral obligation.”

The crowd mostly filled the arena’s lower bowl, and a smattering of people sitting in the upper level. The Sanders campaign had originally scheduled the rally for the 2,700-seat Northrup Auditorium on campus, but moved it to Williams Arena to accommodate more attendees.

It was not immediately clear whether Omar would campaign with Sanders at any future events.

Minnesota’s presidential primary is scheduled for March 3, part of “Super Tuesday,” when voters in several states head to the polls. Sanders previously campaigned at the Minnesota State Fair in late August.

Minnesota’s primary will happen one month after the Iowa caucuses on Feb. 3. Sanders, former Vice President Joe Biden, and U.S. Sen. Elizabeth Warren are in a virtual dead heat in that state, a New York Times poll released Friday indicated.

Minnesota Attorney General Keith Ellison, one of Sanders’ earliest prominent supporters, spoke before Omar and Sanders and urged supporters to campaign vigorously in Minnesota for the Vermont senator.