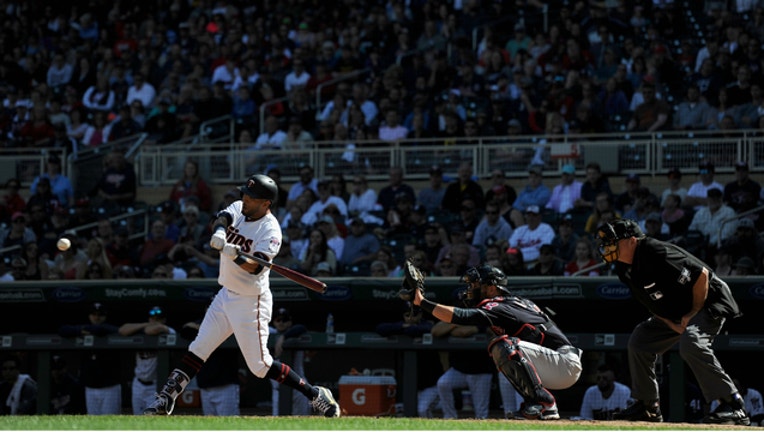 MINNEAPOLIS (AP) - Eddie Rosario hit his third homer of the game, launching a two-run shot in the bottom of the ninth inning to lift the Minnesota Twins over the Cleveland Indians 7-5 Sunday.

Rosario, who began the day with 10 home runs this season, helped the Twins beat the AL Central-leading Indians for the third straight day.

Indians closer Cody Allen (2-2) walked Brian Dozier to lead off the ninth and Rosario followed with a drive to deep right-center field.

Rosario hit a solo homer in the first inning and another solo home run in the seventh. Brian Dozier also homered for Minnesota.

Edwin Encarnacion homered twice for Cleveland, and Michael Brantley's solo shot off Addison Reed in the eighth tied it at 5.

Fernando Rodney (2-2) pitched a scoreless ninth to pick up the victory.

The Twins trailed 4-3 when Dozier led off the seventh against Indians starter Mike Clevenger with his ninth homer of the season to tie it at 4. Rosario then greeted reliever Tyler Olson with his second homer of the game.

Indians center fielder Bradley Zimmer made a spectacular diving grab on Ryan LaMarre's drive to left-center in the second. Bobby Wilson and Dozier followed with singles to bring home a run, but Clevenger came back to retire Rosario and Miguel Sano to limit the Twins to just a run.

Twins starter Kyle Gibson was perfect through the first four innings, striking out six batters. Encarnacion led off the fifth with a 434-foot drive to the second deck in left field.

Encarnacion's second homer was a three-run shot in the sixth that put Cleveland on top 4-3. Reliever Ryan Pressly came on with a runner on second and two out, but he walked Jose Ramirez before Encarnacion hit the first pitch for his 16th homer of the season.