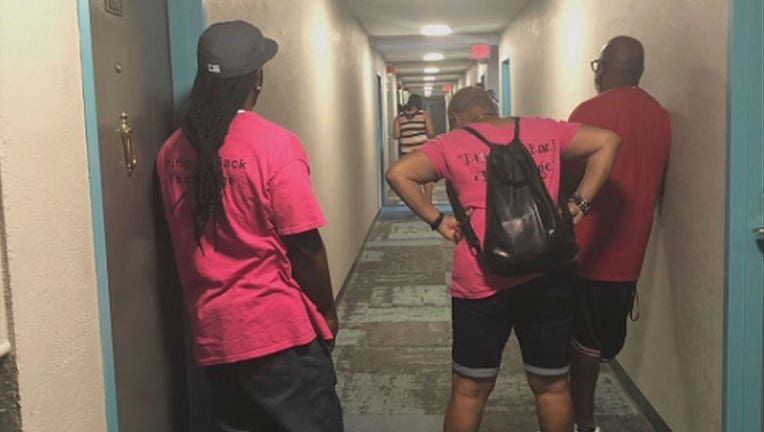 Members from A Mother’s Love and We Push for Peace assisted police in bringing the standoff to a safe conclusion. (Supplied)

MINNEAPOLIS (FOX 9) - A mental health call in Minneapolis this week that lasted eighteen hours ended peacefully thanks to some real patience and teamwork.

It was long, starting Monday night near the Nicollet Mall and lasting under the following afternoon, but the three people involved with the situation say it was worth the effort.

A mental health call in Minneapolis this week that lasted eighteen hours ended peacefully thanks to some real patience and teamwork.

When crews first arrived on Monday, they found a young woman who was in an apartment eight stories above ground and threatening to jump. Family members told Minneapolis police the woman was in a complete crisis with mental health and drug use factoring into the trouble.

"She was screaming and yelling she wanted to kill herself," said Lt. Kelly O'Rourke with MPD. "She was throwing the entire contents of her apartment out the window."

But then police realized she was armed and they feared in her state she could start firing.

"She comes to the window with a gun," recalled Lt. O'Rourke. "Now we’re dealing with an armed suspect. Prior to that, our officers had tried to make entry through a door. She threatened them with a gun. We had to back out and hold the perimeter."

Minneapolis police immediately backed off to settle in for what would end up being 18 hours of patience, talking, and negotiating.

Her behavior escalated, de-escalated, then ramped up again as she started lighting fires inside her apartment. The fire department was dispatched to assist as officers waited for hours outside the building and in a 100-degree hallway making sure she, neighbors and the community were safe. With that, MPD was also working with family and called in community groups A Mother’s Love and We Push for Peace.

By mid-morning, with MPD and A Mother’s Love, family members finally convinced her to open the door, not knowing if she would shoot or what would happen. They went into a chaotic situation.

"They were trying to keep her from spitting and biting on people and she grabbed the rag and she put it on her neck and we were trying to get the rag from around her neck and she clamped down on my hand and would not let go," said Donesther Anderson with A Mother's Love.

The woman was finally subdued and was taken to get help. Everyone was safe and everyone agrees teamwork brought this to a peaceful ending.

"We cannot speak enough about our partnerships with our community groups that are willing to stand there with us and help us, help with alternate solutions," said Deputy Chief Fors.

Police get over 5,000 calls a year to respond to emotionally disturbed people. This one was long but we are told the outcome is not unusual. They almost always call in partners to help bring the situation to a safe ending.