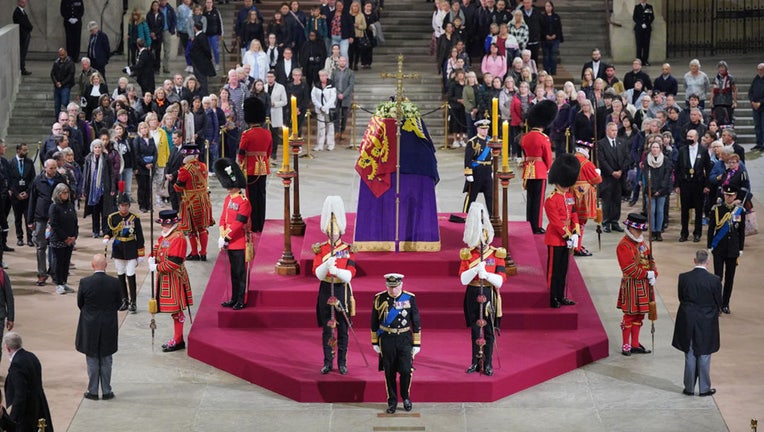 King Charles III, Anne, Princess Royal, Prince Andrew, Duke of York and Prince Edward, Earl of Wessex depart after holding a vigil beside the coffin of their mother, Queen Elizabeth II, as it lies in state on the catafalque in Westminster Hall, at th (Yui Mok - WPA Pool/Getty Images)

Queen Elizabeth II’s state funeral is set to be televised on Monday and industry experts in the United Kingdom are predicting it’ll be the most-watched event in broadcast history.

With the advent of streaming services in addition to regular broadcast television, experts say a staggering 4.1 billion viewers could tune in to the funeral, according to multiple news reports.

"While it's a sad occasion, they can be forgiven for being enthralled by a spectacle that echoes throughout history. For that reason alone they'll be drawn to witness the dawn of this new age in their billions," Carolina Beltramo, TV analyst at WatchTVAbroad.com told FOX Television Stations.

"Thanks to advances in technology, which mean most of us now carry TVs around in our pockets, audience figures will eclipse the opening ceremony of the Atlanta Olympics, when 3.6 billion people watched Muhammad Ali light the Olympic torch in 1996," Beltramo added.

Here’s a look back at a few other high-profile funeral events that drew historic crowds: 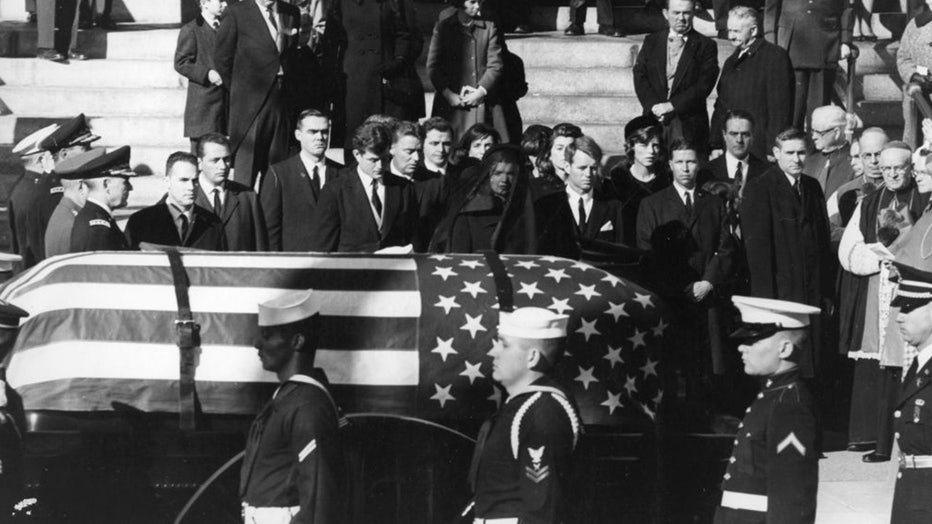 NPR reported JFK’s funeral procession was watched in 93% of all homes that were equipped with TV sets — the largest viewing audience ever recorded to that point.

More than 250,000 people filed past the flag-draped coffin. 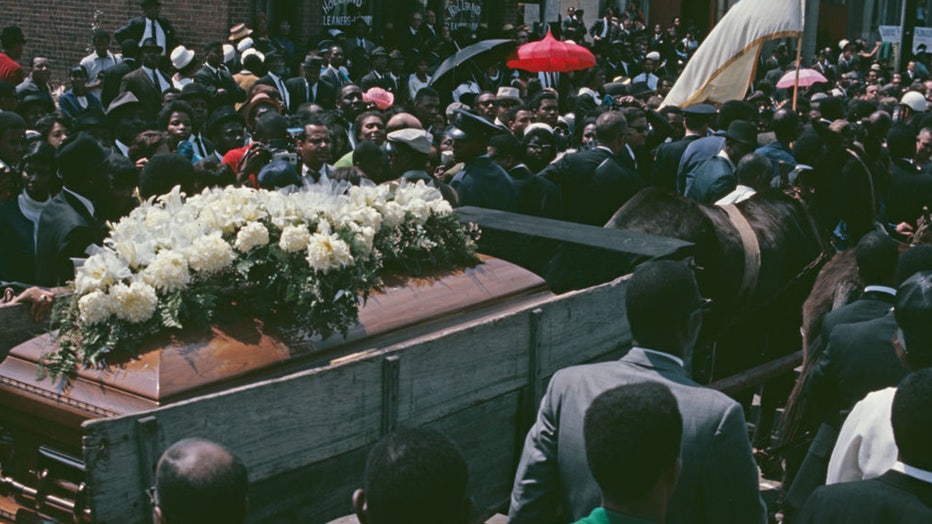 Just a few years later, the funeral for Dr. Martin Luther King Jr.‘s was also historically viewed by millions at home. In person that day in Atlanta, as many as 100,000 people gathered along the four-mile-long procession.

Politicians from around the country, as well as fellow civil rights leaders, notable entertainers, authors and poets attended the service. 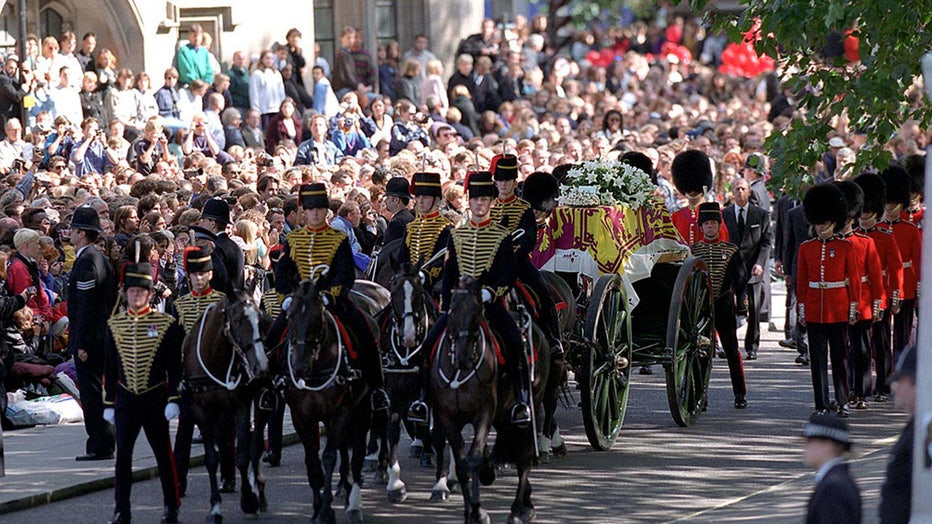 FILE - The Coffin Of Diana, Princess Of Wales, On Its Journey To Westminster Abbey, London. (Tim Graham Photo Library via Getty Images)

Some 2.5 billion people across the world tuned in to watch Princess Diana’s funeral following her untimely death in a car crash in Paris. At least a million lined the streets to watch the procession.

Her funeral lasted nearly six and a half hours, and the service at Westminster Abbey included a reading from then-Prime Minster Tony Blair and a performance of Sir Elton John’s "Candle in the Wind."

Her funeral to this day is still reported to be the most-watched.

Saying goodbye to the longest-reigning monarch in British history 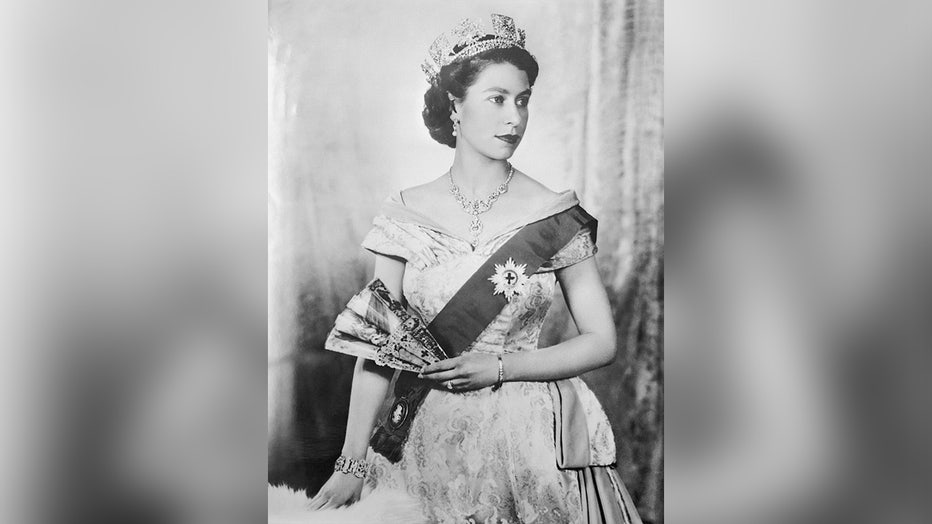 FILE - Portrait of Queen Elizabeth II of England wearing tiara and ribbon of the order of the Garder. (Getty Images)

The queen died on Sept. 8 at 96 at Balmoral Castle, her beloved summer home in Scotland, after having steadied and modernized the royal institution through seven decades of huge social change.

Her passing ends an era, the modern Elizabethan age. Her 73-year-old son, now known as King Charles III, automatically became king upon her death however, his coronation might not take place for months.

Earlier this year, the queen announced her "sincere wish" that Camilla be known as "Queen Consort" once then-Prince Charles takes the throne. The message tied up a loose end that hung over the House of Windsor since Charles’ divorce from the popular Princess Diana.

King Charles’ eldest son, Prince William, Duke of Cambridge, is now next in line to inherit the throne alongside his wife, Catherine, the Duchess of Cambridge.

Hundreds of thousands of people have flocked to London’s medieval Westminster Hall to pay their respects to the queen, whose coffin will lie in state until her funeral on Monday.

So many people came to see the queen that authorities on Friday had to call a temporary halt to more joining the miles-long queue.

By late afternoon, a live tracker of the queue to get into historic Westminster Hall said it had reopened, but the British government warned that the waiting time to cover the 5 miles (8 kilometers) from the start of the line in Southwark Park to Parliament had climbed to more than 24 hours. The government also warned that "overnight temperatures will be cold."

King Charles III and his siblings will be standing vigil around the flag-draped coffin on Friday evening.

What happens after the funeral? 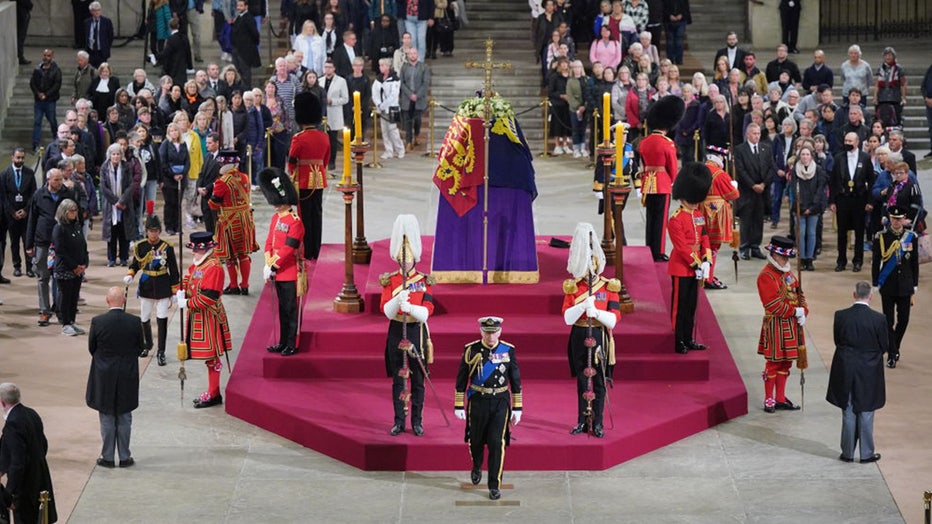 King Charles III, Anne, Princess Royal, Prince Andrew, Duke of York and Prince Edward, Earl of Wessex depart after holding a vigil beside the coffin of their mother, Queen Elizabeth II, as it lies in state on the catafalque in Westminster Hall, at th (Yui Mok - WPA Pool/Getty Images)

After the state funeral, attended by some 2,000 guests, including visiting heads of state and other dignitaries, Elizabeth's coffin will be transported through the historic heart of London from Westminster Abbey to Wellington Arch near Buckingham Palace on a horse-drawn gun carriage with Charles and other royals walking behind.

The coffin will then be driven in the state hearse to Windsor for a committal service at St. George's Chapel near Windsor Castle, where the coffin will be lowered into the Royal Vault and the sovereign’s piper will play a lament, the Archbishop of Canterbury will pronounce the blessing and the congregation will sing "God Save The King."

Members of the royal family will then hold a private burial service at the King George VI Memorial Chapel, where the queen will be interred with her late husband, Prince Philip, who died last year.

The Associated Press and Megan Ziegler contributed to this report. This story was reported from Los Angeles. Editor's note: Pool video has since been removed from this story due to usage restrictions from the royal family.