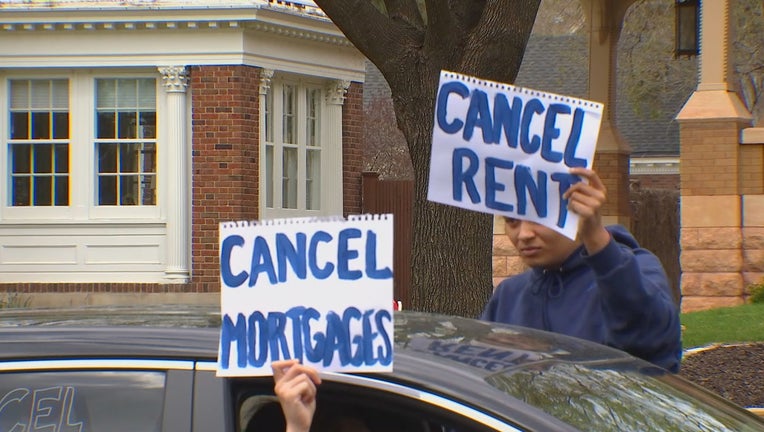 (FOX 9) - Hundreds of Minnesotans took to the streets in their cars on Friday as part of nationwide rent strikes.

The protesters are asking that the governor forgive all rent and mortgages. Many protestors are asking the question: How am I supposed to pay my rent when I don’t have a job.

They want rent and mortgage forgiveness for April, May, June and possibly even July. But some landlords say it’s just not that easy.

"People just don’t have the money to pay their rent," said Chloe Jackson, who was among the protesters. "It's not like folks are saying I'm just going to withhold the money. People are being forced to choose between providing food from their families, or pay your rent."

Jackson is not alone. For those that are out of work or experiencing a reduction in hours, they’re wondering how, without that income, they are supposed to afford their rent.

"If the mortgage and the rent is cancelled, that would free up money for folks, and they wouldn't have to worry and the landlords would be able to be at ease as well because the mortgages would be cancelled," she argued.

"You can't just say 'free rent,' said landlord John Howe. "If I moved into your home and didn’t pay rent, how would you feel about that?"

Howe says he, like other landlords, is working with his tenants right now as they struggle to pay. But if they don’t, his hands are tied, as Governor Walz has ordered a halt on all evictions during the peacetime emergency.

"There’s a better way of doing this than just punishing all landlords, or saying were going to stop all evictions," he said. "At some point you have to get the economy going and at some point, landlords are going to have to get paid rent. Unless the government is going to come in and subsidize it."

Friday, the House Ways and Means Committee advanced a bill that would provide an additional $100 million to help renters and homeowners during this pandemic. That is set to move to the House floor next week.