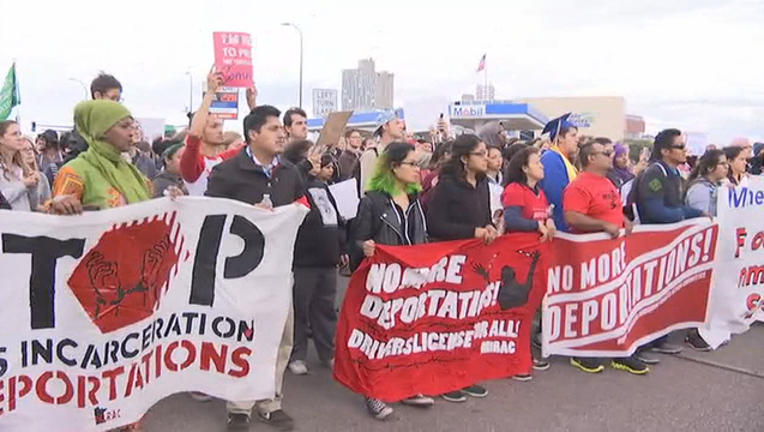 PALM BEACH, Fla. (AP) - President Donald Trump declared Sunday that a deal to help "Dreamer" immigrants was "NO MORE" and threatened to pull out of a free trade agreement with Mexico unless it does more to stop people from crossing into the U.S. He claimed they're coming to take advantage of protections granted certain immigrants.

"NO MORE DACA DEAL!" Trump tweeted one hour after he started the day by wishing his followers a "HAPPY EASTER!"

He said Mexico must "stop the big drug and people flows, or I will stop their cash cow, NAFTA. NEED WALL!" The U.S., Canada and Mexico are currently renegotiating the North American Free Trade Agreement at Trump's insistence.

"Mexico has got to help us at the border," Trump told reporters before he attended Easter services at an Episcopal church near his Palm Beach, Florida, home. "A lot of people are coming in because they want to take advantage of DACA."

Former President Barack Obama created the Deferred Action for Childhood Arrivals program to protect from deportation hundreds of thousands of immigrants who are living in the U.S. illegally after they were brought here as children. Trump ended the program last year, but gave Congress six months to pass legislation enshrining it. A deal has so far proved elusive.

It was not immediately clear what Trump was referring to when he said people are coming to take advantage of the program, which granted the immigrants work permits.

The government is not issuing new permits, though existing ones can be renewed. Anyone who wanted to participate had a set period of time in which to sign up, and the program is no longer open to new entrants. Proposed DACA deals crafted by lawmakers also were not open to new participants.

Trump did not explain his thinking when reporters asked as he entered the Church of Bethesda-by-the-Sea with his wife, Melania, and daughter Tiffany. The White House also did not immediately respond to a request for clarification.

Trump, who addressed reporters briefly before entering the church, again blamed Democrats for the failure to reach an agreement on the "Dreamers."

"They had a great chance. The Democrats blew it. They had a great, great chance, but we'll have to take a look," he said. "Mexico has got to help us at the border. They flow right through Mexico, they send them into the United States. It can't happen that way."