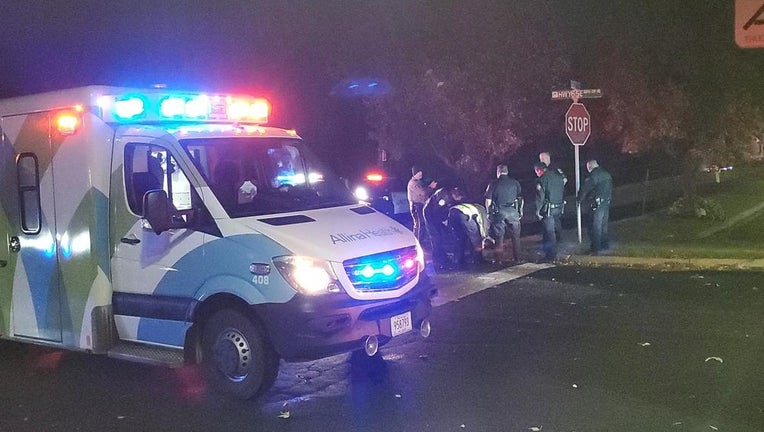 Officers took the suspect into custody before loading him onto an ambulance in Fridley.

FRIDLEY, Minn. (FOX 9) - A police chase that spanned two counties ended with a fiery crash in Fridley, Minnesota on Saturday.

According to police, at about 8 p.m., officers received several 911 calls about a possible imaired driver in the area of Larpenteur and Snelling Avenue in Roseville. Callers said the driver was all over the road and nearly struck several cars and a bus stop. Officers located the car near Snelling and County Road C2 and noticed the driver was swerving.

Officers tried to stop the car, but the driver continued onto Highway 10. Police lost sight of the driver and called off the chase. About 10 minutes later, police responded to Central Avenue in Fridley where the suspect's vehicle hit a building on the 1200 block off of 73rd Avenue Northeast. The vehicle caught fire after striking a fuel container.

A police chase that spanned two counties ended with a fiery crash in the City of Fridley, Minnesota on Saturday.

However, when officers got to the vehicle, the driver had left the scene. Officers set up a perimeter and eventually located the man near a gas station. FOX 9 crews were on scene as the man walked up to officers and surrendered.

Authorities said the man was obviously impaired and was transported to the hospital to be treated for minor injuries. The driver has several prior alcohol-related convictions.