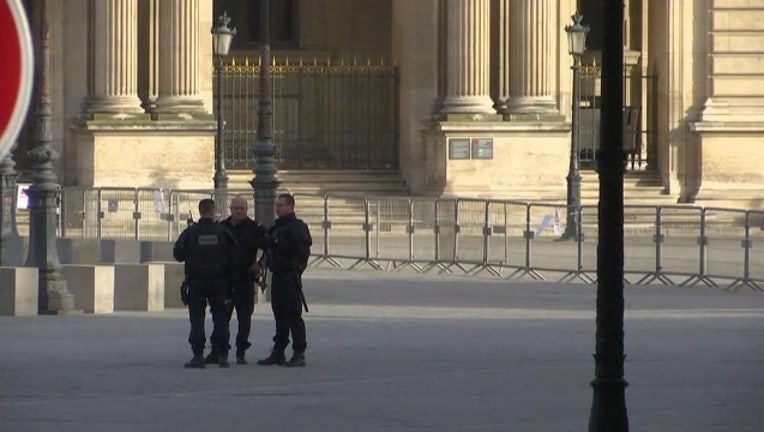 PARIS (AP) -- The Louvre Museum reopened to the public Saturday morning, less than 24 hours after a machete-wielding assailant shouting "Allahu akbar!" attacked French soldiers guarding the sprawling building and was shot by them.

The worldwide draw of the iconic museum in central Paris, host to thousands of artworks including the "Mona Lisa," was on full display on a drizzly winter day as tourists filed by armed police and soldiers patrolling outside the site, which was closed immediately after Friday's attack.

The attacker was shot four times after slightly injuring a soldier patrolling the nearby underground mall but his injuries on Saturday were no longer life-threatening, the Paris prosecutor's office said. French President Francois Hollande said there is "no doubt" the suspect's actions were a terror attack, and he will be questioned as soon as that is possible.

An Egyptian Interior Ministry official confirmed to The Associated Press on Saturday that the Louvre attacker was a 28-year-old Egyptian-born man named Abdullah Reda Refaie al-Hamahmy. The official said an initial investigation in Egypt found no record of political activism, criminal activity or membership in any militant group by him.

The official spoke on condition of anonymity because he was not authorized to brief the media. French authorities said they are not yet ready to name the suspect, but confirmed Friday they thought he was Egyptian.

The suspect bought two military machetes at a gun store in Paris, according to Paris prosecutor Francois Molins. He also paid 1,700 euros ($1,834) for a one-week stay at an apartment in the chic 8th arrondissement of the French capital, near the Champs-Elysees Avenue.

Molins said the suspect was believed to have been living in the United Arab Emirates and came to Paris on Jan. 26 on a tourist visa.

On the Twitter account of an "Abdallah El-Hamahmy," a tweet was posted about a trip from Dubai to Paris on Jan. 26. In the profile photo, Hamahmy is seen smiling and leaning against a wall in a blue-and-white sports jacket.

In another tweet in Arabic written shortly before the attack, Hamahmy posted an angry tirade: "No negotiation, no compromise, no letting up, certainly no climb down, relentless war."

In an interview with the Dubai-based news channel al-Hadath aired Saturday, Hamahmy's father, Reda Refae al-Hamahmy, said he was shocked to learn of his son's alleged involvement in the latest Paris attack.

"All I want is to know the truth and find out whether he is dead or alive," the father said.

"This is all a scenario made up by the French government to justify the soldiers opening fire," he added, denying that his son was radical or a member of any militant groups.

"He is a very normal young man," he said.

The suspect's father said Hamahmy is married with a 7-month-old child and told them he intended to tour the sights in Paris before leaving France. He sent his father a photo of himself with the Eiffel Tower in the background shortly before the clash.

Hamahmy's brother Ahmed, who works at the Health Ministry in Dubai, was interrogated for several hours by security officials in the United Arab Emirates, the father said. In Egypt, several officers from the domestic security agency visited the family home in the Nile Delta on Friday night to question family members.

At the Louvre on Saturday, visitors expressed mixed feelings on the clash, with some planning to leave Paris earlier than planned.

"We heard on the news that a terrorist attack took place... We stayed at the hotel and we're thinking about cutting our vacation in Paris short," said Lucia Reveron from Argentina.

Others were stoic and felt safer because of the heightened security presence.

"I went around yesterday, in the evening, and security was everywhere. Even now, when we arrived (at the Louvre) we were checked and it's secure. I don't feel any threats," said Kurt Vellafonde from Malta.

With the spate of attacks on France in the last few years, many residents have become resilient, even blase.

"There have been very good security measures taken and it does not scare me at all," said Regine Dechivre, laughing. "It's the phenomena of a person a little bit disturbed. The investigation will tell us what exactly happened."

The United Arab Emirates condemned the attack but UAE officials offered no comment Saturday about the suspect's possible connection to the country.

The UAE, which includes the Mideast commercial hub of Dubai, is a major destination for guest workers from Egypt and numerous other countries. Foreign residents outnumber native Emiratis roughly four to one.

`'The UAE, while strongly condemning this hideous crime, affirms its full solidarity with the friendly French Republic in these circumstances and its support for whatever measures France may take to preserve its security and safety of its citizens and residents," the Ministry of Foreign Affairs and International Cooperation said in a statement.

France is working with the Emirates to build a branch of the Louvre in the federal capital, Abu Dhabi. The project has been repeatedly delayed and is now expected to open later this year.