Oakland County Prosecutor Karen McDonald has revealed more information about what led her office to charge the parents of Ethan Crumbley with involuntary manslaughter.

OAKLAND COUNTY, Mich. - The parents of the 15-year-old suspect that killed multiple people at Oxford High School this week have been charged with involuntary manslaughter.

Both James and Jennifer Crumbley will be charged by the Oakland County Prosecutor's Office with four counts each. If convicted, they face up to 15 years in prison for each count. Evidence ranging from text messages, the purchase of a firearm, and a meeting before the tragedy unfolded all factored into the charges directed toward the parents.

"The parents were the only individuals in the position to know the access to weapons," Oakland County prosecutor Karen McDonald said Thursday. The gun "seems to have been just freely available to that individual."

During a press conference, McDonald chastised both the parents of Ethan Crumbley for not making decisions that would keep their son from harming others and the state's gun laws for being too broad.

"I have tremendous compassion and empathy for parents who have children who are struggling and at risk for whatever reason," she said. "And I am by no means saying that an active shooter situation should result in a criminal prosecution against parents."

"But the facts of this case are so egregious reading this document, looking at it, reading the words "help me" with a gun, "blood everywhere," this doesn't just impact me as a prosecutor and a lawyer, it impacts me as a mother." 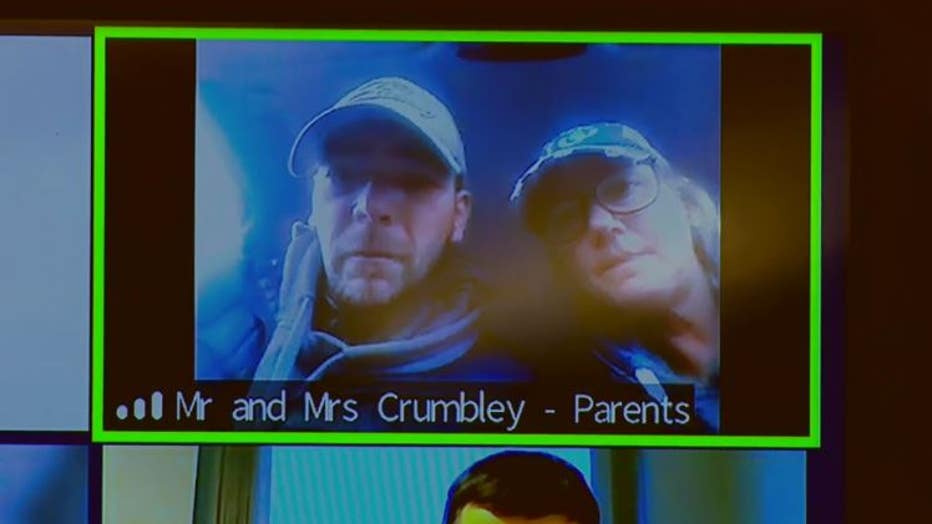 The words that McDonald was reading were notes and drawings made by Ethan Crumbley in the days leading up to the shooting. She said they should have served as enough of a warning sign that Crumbley's parents should have been aware of the danger that their son posed.

The firearm that was found at the crime scene, a 9 mm Sig Sauer SP 2022, was purchased by James from a shooting store in Oxford on Nov. 26. It was also in Ethan Crumbley's backpack the day he shot several people at the school.

A store employee interviewed by the prosecutor's office confirmed that Ethan was present at the time of the purchase.

Later that day, an online social media post from Ethan revealed a gun that matched the same one purchased by his dad. The post's caption read "Just got my new beauty today, Sig Sauer 9 mm. Any questions, I will answer."

Days before on Nov. 21, another social media post from Jennifer Crumbley read "Mom and Son day testing out his new Christmas present," the prosecutor said. That same day, a teacher at Oxford High School saw Ethan was searching for ammunition on his cell phone during his class. They reported it to school officials.

READ MORE: Oxford superintendent: No disciplinary action was warranted for shooting suspect prior to attack

Jennifer was contacted about the incident via voicemail and email but never responded to school officials.

However, Jennifer did later exchange text messages with Ethan about the incident, telling her son "LOL I'm not mad at you. You have to learn not to get caught."

The meeting with the counselor

On Nov. 30 the day the mass shooting occurred, a teacher came across a note on Ethan's desk in the morning. In it was a drawing of a semi-automatic handgun pointing at the words "the thoughts won't stop, help me."

In another part of the note, the words above that bullet read "blood everywhere." There was also a drawing of a person who appears to have been shot twice and bleeding. There was also a laughing emoji.

As a result of the drawings, both of Crumbley's parents and Ethan himself were called into a meeting, alongside a counselor. The counselor at that point had obtained the drawing, but according to McDonald, Ethan had already altered it, having scratched out most of the content.

During the meeting, the parents were advised that they were required to get their son into counseling within 48 hours.

"There were a lot of things that could have been so simple to prevent," said McDonald.

RELATED: Why was Ethan Crumbley charged with terrorism?

However, after the meeting, the parents went home without their son. According to the prosecutor, they failed to ask their son if he had the gun or where it was located. They "failed to inspect the backpack where he had a gun. They resisted the idea of their son leaving school. Instead, they left the high school without their son and he was returned to the classroom.

Shortly after the meeting, reports of an active shooter were made public. At that time, McDonald said Jennifer Crumbley texted her son at 1:22 p.m. "Ethan, don't do it."

At 1:37 p.m., James Crumbley called 911 saying police that a gun was missing from his house and believed his son was the shooter.

‘No discipline was warranted’

"Yes, this student did have contact with our front office. And yes his parents were on campus Nov. 30."

It's unclear how many people were aware of Ethan Crumbley's drawings or the danger he posed. McDonald said she had no information about the extent of the school's knowledge ahead of the shooting.