The owners of a red Jeep found abandoned Thursday morning near the shoreline in Myrtle Beach as Hurricane Dorian lashed the area have used their newfound notoriety to start a GoFundMe to raise money for disaster relief in the Bahamas.

MYRTLE BEACH, S.C. - The owners of a red Jeep found abandoned Thursday morning near the shoreline in Myrtle Beach as Hurricane Dorian lashed the area have used their newfound notoriety to start a GoFundMe to raise money for disaster relief in the Bahamas.

Dee Horrell, who organized the GoFundMe page, said she was one of the owners of the Jeep and explained that they loaned the car to a family member a few weeks prior.

The person eventually drove the car onto the beach, getting it stuck in a ditch. 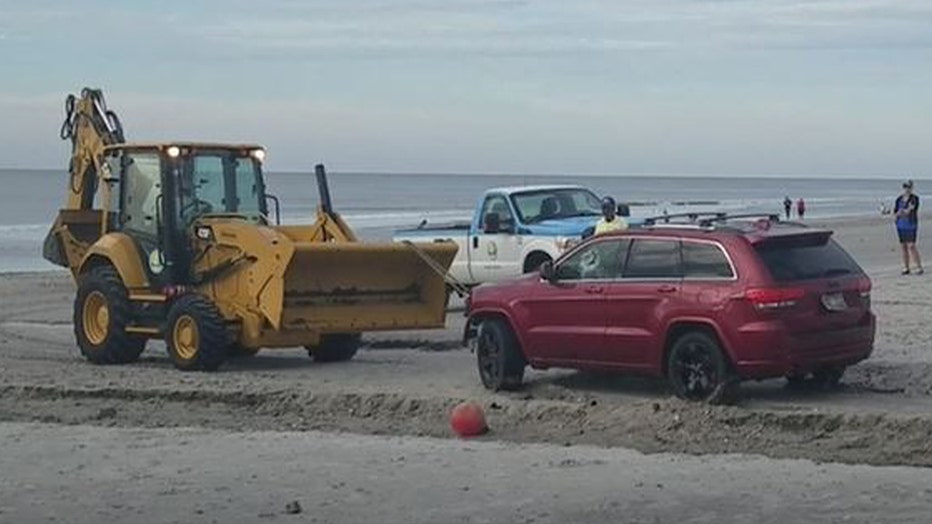 “While driving he accidentally hit the drainage wall and got stuck. He immediately left to get help but all businesses were shut down and services inaccessible due to preparation for the storm. By the time he got back the tide was coming in and it was too late. Along with the vehicle he also left behind personal items inside to get help,” they wrote on the donation page.

Police were finally able to remove the abandoned maroon Jeep Cherokee Friday morning and have tried to contact the family member who left the vehicle there in the first place.

Police came across the abandoned vehicle Thursday morning, finding it stuck near the shoreline as Category 2 Hurricane Dorian lashed the coast.

Waves crashed into the car, causing it to sway and appear as if it was being pulled into the surf. They said the vehicle was unoccupied and had heavy front-end damage from the driver attempting to drive the SUV out of the ditch.

People passing by along with local TV news crews captured video of the abandoned car being consumed by waves. Many of the bystanders scratched their heads, wondering how the vehicle got there in the first place.

People were so astounded by the Jeep that it caused a social media frenzy, influencing memes and its own hashtag. One person even created a Twitter account for the discarded automobile.

In a Facebook post by Timothy Kipp, a lone bagpiper played “Amazing Grace” as a sendoff for the Jeep as it slowly became consumed by the tide.

Police eventually removed the vehicle with help from the local public works team.

Authorities said they then went to the address of the registered owner, who told them his cousin had left the car on the beach.

Police added that they attempted to call the family member, but “no one answered so a voicemail was left to contact the police department.”

On the GoFundMe page, the Jeep owners said the incident was a complete accident and that it was not a publicity stunt or done for an insurance claim.

They hope to turn the accident into an act of kindness by raising money for the people affected by Hurricane Dorian in the Bahamas.

“We may have lost a vehicle but that is small in comparison to what others have lost during this storm,” the owners said.

According to their GoFundMe page, all of the funds will be donated to UNICEF in order to help with disaster relief.