It has been a challenging year for so many, but for one Otsego family, Christmas 2020 will bring them much to celebrate - a full family under one roof after the rare birth of conjoined twins.

(FOX 9) - It has been a challenging year for so many, but for one Otsego family, Christmas 2020 will bring them much to celebrate - a full family under one roof after the rare birth of conjoined twins.

Robert and Kate Erickson were looking to fill their home with more love and joy, and give young Chase and Leana another sibling when they got a surprise forever changing their lives.

An ultrasound revealed twins, and a closer inspection provided the real shocker - the babies were attached to one another.

“We were really excited but scared at the same time,” Robert said. 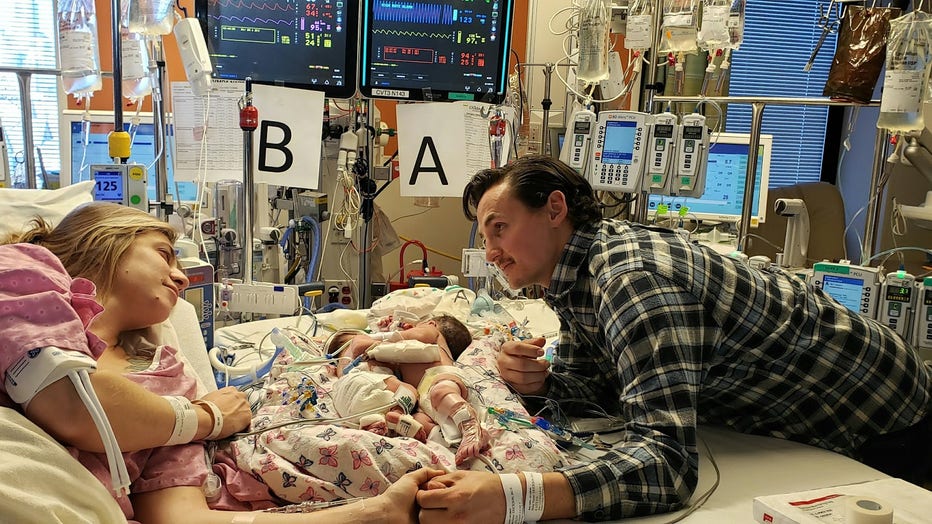 The Erickson twins and Robert and Kate.

The couple did their research and found that conjoined twins occur once in about every 200,000 live births.

“It was draining emotionally just because of everything that was going on,” Kate said.

What had them so concerned was that their medical team at the Midwest Fetal Care Center - a collaboration between Allina and Children’s Minnesota - reported that only about half of conjoined twins will make it after birth.

“We knew as soon as they were born, they were going to be fighting to survive,” Robert said.

On Nov. 22, 2019, the couple received what they described as the first of several miracles when doctors surgically delivered baby Remi and baby Reese very much alive.

“They expected both of them to be intubated, need all these meds, full life support… all these extra measures they were going to take for them, but they came out kicking, harder than we ever expected,” Kate said.

Remi and Reese, face-to-face with each other, were connected thru the chest wall, abdomen, and pelvic sections of their little bodies. Mom and dad were immediately in love with both girls, cherishing each and every cuddle no matter how complicated it was to hold them. 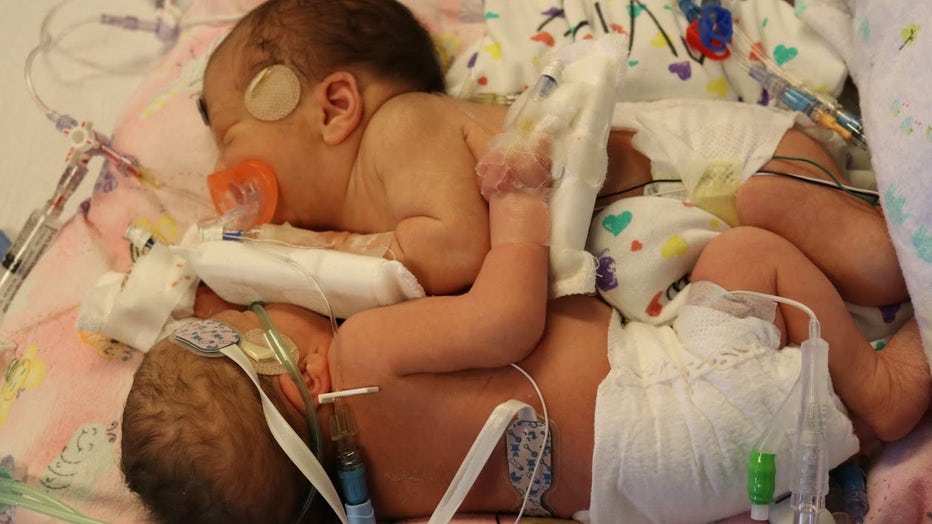 The issue, though, is that Remi and Reese shared a liver and arrived with just a single umbilical cord, whereas healthy twins have two. While Remi appeared well-developed after the 36-week pregnancy, Reese was in rough shape with significant, life-threatening heart and blood circulation issues.

“It was like Remi was acting like a dialysis machine for Reese and taking care of her and providing this blood flow. So, it was sort of amazing to see that Reese was surviving because of Remi, that these sisters were together, taking care of each other in this way,” Robert said.

After four-and-a-half months of growth and around the clock, in-hospital care, the call was made to separate the sisters. Going into the delicate surgery, mom and dad were confident Remi would make it through but were terrified they might lose Reese, who was hooked up to breathing apparatus and required ongoing assistance to keep her damaged heart pumping.

Pediatric surgeon Dr. Joseph Lillegard had a big job ahead.

On April 9, another miracle happened after a fraught, seven-hour surgery that included a myriad of neo-natal and medical specialists across multiple disciplines. Both babies survived the separation.

“Everybody was smiling,” Kate said. “You couldn’t stop smiling. It was just huge, to have both of them come out doing amazing…I think all of them were not expecting that because of how sick she was.”

Remi would head home about a month later, but Reese would require hospitalization straight through her first birthday.

Pandemic restrictions and quarantine kept the Ericksons apart from their other baby for weeks and weeks until Reese was discharged from children’s hospital days before Thanksgiving.

“It’s great,” Robert said. “We’re so excited. We’re so glad to have them home and not have the family split apart, everyone under one roof. It’s just incredible.”

Now whole, the family of six is celebrating the best Christmas gift.

Reese, who still needs a ventilator, 24-7 nursing, and potentially a heart transplant down the road, continues to amaze each and every day. And with the fight she has shown so far, her parents insist the stars are the limit.