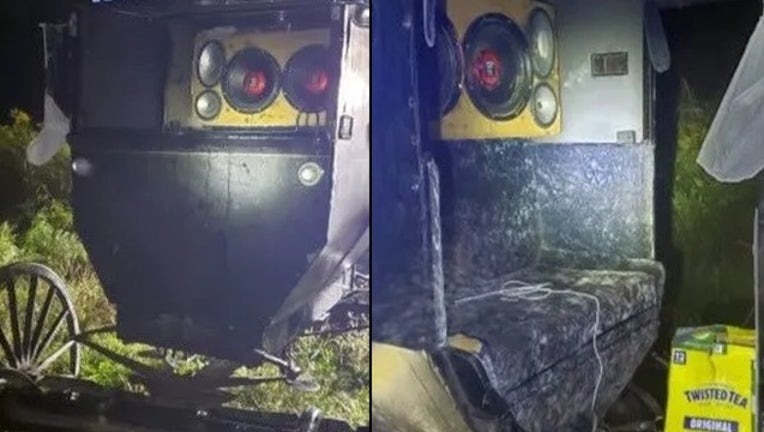 NORTH BLOOMFIELD, Ohio - Here's something you don't see every day.

Deputies in Ohio pulled over two Amish men over the weekend who they said had decked out their horse-drawn buggy with a massive stereo system and were throwing back beers.

According to Fox News, deputies with the Trumbull County Sheriff's Office stopped the buggy around 1:00 a.m. Sunday. That's when they reportedly found a 12-pack of Michelob Ultra on top of the vehicle with several open bottles inside.

The buggy was also equipped with a rocking stereo system.

Both men-- who come from a community which largely shuns high technology and alcohol -- bailed out of the buggy so fast that the horse continued pulling the empty coach down the road.

"I've never operated an Amish buggy with a horse, but I'm told that the horse will know the way home regardless of [whether] the operator is awake or even in the buggy, and that horse went a little further down the road and onto an oil/gas well road and stopped," Trumbull County Chief Deputy Joe Dragovich told Fox 8.

The buggy was towed and deputies found someone to care for the horses until the owners come forward.

Once authorities identify the two men, they could be charged with failure to comply with the deputy's commands.

"Maybe there's just that fear of the consequences and that would be a reality check for them, that there are consequences, but I encourage them to come forward and get their buggy and horse," said Dragovich.