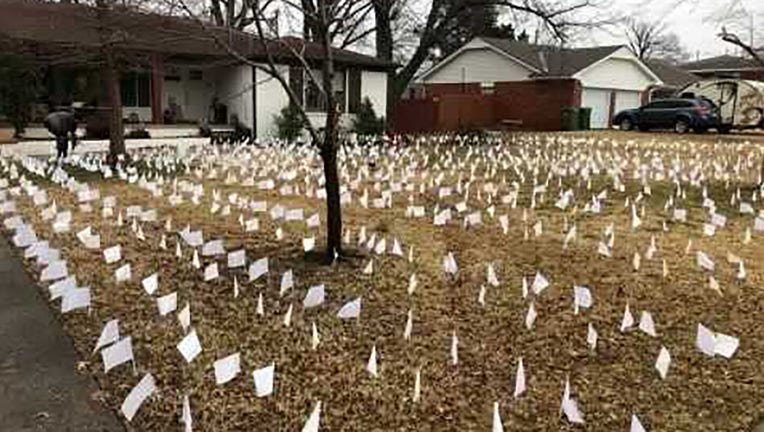 Brandy Becerra’s front lawn is shown with more than 2,000 flags in honor of those who have died from the virus in Oklahoma. (Photo credit: Brandy Becerra)

YUKON, Okla. - A woman in Oklahoma has turned her front yard into a memorial in honor of those who have died from COVID-19, a white flag to represent every life lost in the state.

Brandy Becerra, who lives in Yukon, a city located just outside of Oklahoma City, has placed more than 2,000 flags on her lawn. The stunning visual, a sea of white flags lining her yard along a busy street, is intended to serve as a reminder for those who drive by of the ongoing coronavirus pandemic and its devastating toll.

"I want it to be in your face, every day that you drive by, that it’s not just a number. It’s not a hoax. These are people who are no longer here. These are people that aren’t going to be able to celebrate the new year," Becerra said.

A Florida mother and daughter both died of COVID-19 in the same hospital less than a week apart.

She started by placing flags for every 1,000 Americans who have died from COVID-19, but later began focusing on deaths in Oklahoma — partly due to the state’s response to the pandemic and those in the area who refuse to wear a mask in public.

"It just seemed like at every turn when you had the opportunity as an elected official to help the people who you are to represent, and they failed each time, and they continue to fail. And I see the numbers going up, I thought, ‘Okay, this needs to be more directed,’" Becerra said.

Nearly 2,500 people have died from the virus in Oklahoma, and more than 290,000 cases have been confirmed since the outbreak began earlier this year, according to data compiled by the Oklahoma State Department of Health. Health officials have also reported a record number of hospitalizations this week, fearing the effects of holiday travel and gatherings could push facilities and staff to their breaking points in the weeks ahead.

Gov. Kevin Stitt has called on residents to wear masks in public but has not implemented a mandate statewide. Some cities, including Oklahoma City and Tulsa, have adopted their own requirements.

Becerra, who has health conditions that put her at high risk for COVID-19, said some people have expressed gratitude for her display — with a few even "pulling up in my driveway crying." But she also receives a great deal of criticism for the memorial "every day." Some drive by and scream obscenities, she added.

Becerra said she’ll continue adding flags to her property, hopeful that the tragic display will lead to others doing their part to control the spread of the virus in her community.

"It hurts my heart every day that I have to go out there and put a flag in the ground for somebody that has been lost," she said. "You’re not forgotten, you’re not just a number. These people mattered. These people were important. Every life is important."

RELATED: "Patients are dying like flies": Nurse in ICU begs the public to stop being careless