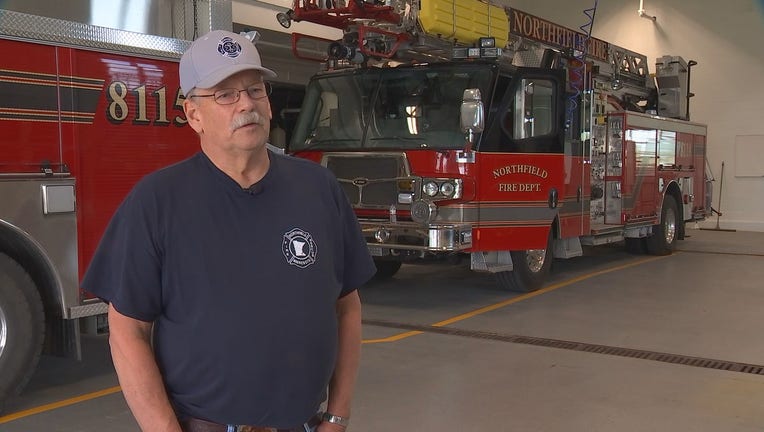 Mike Kruse, a 47-year veteran of the Northfield Fire Department, is the longest-tenured 'sleeper' firefighter in Minnesota.

NORTHFIELD, Minn. (FOX 9) - Known as “sleepers”, some firefighters live at the stations fulltime.

Usually, sleepers are young men who move out of the fire station after a few years. One sleeper, in Northfield, Minnesota, will be moving out Thursday after 47 years.

Usually, sleepers are young men who move out of the fire station after a few years. One sleeper, in Northfield, Minnesota, will be moving out Thursday after 47 years.

Mike Kruse never planned to call the Northfield Fire Department home for nearly a half-century after he moved in at age 21.

That year, his dad told him there was a slot open for a sleeper. He moved in May 8, 1973 when the building was one-year-old.

In his quarters there is a kitchen area and a dining room. There, young, single men live in rooms rent-free.

In return, they clean up, take out the garbage and man the station overnight to answer calls.

When the rooms of the sleeper units were renovated last year, Kruse only moved the bare basics back in.

In his retirement letter, Kruse notes that retirement has been on his mind for 12 years. In fact, he first dated the letter May 7, 2008.

Kruse is by far the longest-serving sleeper firefighter in Minnesota. At age 68, he decided his day with the Northfield Fire Department would be done. He plans to retire up north to his cabin.

Over the years, Kruse has saved lives, delivered babies and responded to about 14,000 calls.

“I pulled a woman from a burning building once,” he recalled.

Thursday, there won’t be any big retirement party, in part because of COVID-19. In January, at the department’s annual banquet, he will be back to be honored for his duty and his life at the station.

“Tomorrow night it’s going to get worse as the night goes on,” he said. “It’s just something that I know I’ll miss. I know I’ve helped a lot of people.”