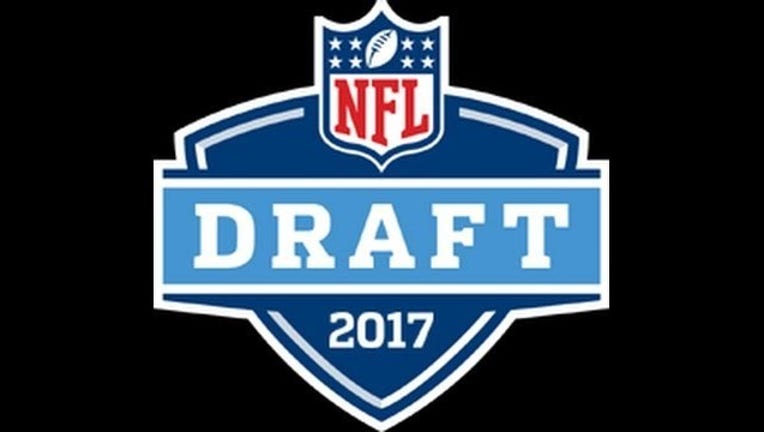 Courtesy of the National Football League

PHILADELPHIA (KMSP) - Though the Vikings don't have a pick in the first round of the NFL Draft Thursday night, what happens at the Philadelphia Art Museum still matters for Minnesota fans, with the rest of the NFC North getting the opportunity to select their future franchise players.

Here's a running tally of the teams' selections as the night goes on:

The general consensus No. 1 pick among analysts, Cleveland didn't exactly surprise anyone in taking the Texas A&M standout, despite rumors they were interested in quarterback Mitchell Trubisky of North Carolina.

In a strange turn of draft-night drama, Chicago traded up one spot to ensure their selection of a quarterback--despite signing another quarterback, Mike Glennon, to a three-year, $45 million deal recently. It's no secret the Bears have struggled at the quarterback position for years--and though neither is sure bet, Chicago hopes that two is better than one.

The 49ers stuck close to home Thursday, taking their second-straight Stanford player in the first round. With a team-high 61 tackles for the Cardinal last season, San Francisco hopes Thomas can help their anemic run defense this season.

Despite missing the last five games of the season due to an ankle injury Fournette was projected to be a top draft pick, and lord knows Jacksonville can use the backfield help this season after finishing with an NFL-worst 57 rushing touchdowns last year.

With his college coach, P.J. Fleck, who is now at the helm for the Minnesota Gophers, on hand to watch the draft with him in Philadelphia, Davis cracked the top five. After setting the receiving record at Western Michigan, Tennessee is looking for Davis to connect with quarterback Marcus Mariota for more of the same.

Projected by many as one of the most dominant players in this year's draft, Adams will have an opportunity to make an immediate difference on a team that has struggled against the pass in recent years.

It's the Chargers' first season in Los Angeles, and they've had their eye on Williams for a while, according to NFL Network Reporter Ian Rapoport, holding a private workout for the Clemson standout within the last few weeks. He's not the best receiver in the draft, but the Chargers seem to love his big-play potential.

Hoping to give some backfield help for quarterback Cam Newton, Carolina looks to 2015 Heisman runner-up McCaffrey, who holds the NCAA record for single-season all purpose yards.

Wide receivers seem to be the hot commodity in this year's draft, with Ross being the third selected. Ross can catch--but he can also run, and it's his speed that Cincinnati is looking to use come fall.

The Chiefs haven't had much luck in past years with quarterbacks, but are hoping to turn the tide this year with Mahoney, despite the fact that Texas Tech failed to make a bowl game in 2016.

With just one year as a starter under his belt, the former 4-star recruit shone for perennial contender Ohio State last year, and ran a mind-boggling 4.36 40 yard dash at the Combine. The Saints could use the help in their secondary, which was 30th in the NFL last season in pass defense.

Houston sent quarterback Brock Osweiler to Cleveland earlier this year, so it seems fitting that they would trade up with the Browns to select what they hope will be their next franchise quarterback. After making 35 starts for Clemson, the Texans hope Watson's experience translates to success at the next level.

The Cardinals had the second-best defense in the NFL last season, but lost a good chunk of their snaps from last season. With Reddick on their side, however, the Cardinals hope to not skip a beat.

A unanimous first-team All-American, Hooker was a big part of Ohio State's secondary. The Colts like his ability to generate turnovers--a stated focus of head coach Chuck Pagano.

With a glut of talented cornerbacks, the Ravens said in advance they were looking for the best player available to bolster their secondary this year.

Versatile linemen are always in season, and the Chiefs got a good one in Allen.

Yet another talented cornerback, Jackson was the PAC-12 Defensive Player of the Year last season. Though he's a little small, most analysts say Jackson has a good chance of making an impact for the Titans next season.

One of the highest drafted tight ends in NFL history, the Buccaneers hope they have a potential difference-maker on their hands.

The Lions had a hole to fill at linebacker, and Davis' speed will be an asset if he can stay healthy.

Missouri has been churning out pass rushers in recent years, and Harris is no exception.

The Giants were hoping for O.J. Howard out of Alabama, but after the Buccaneers snatched him up the Giants still took a tight end, hoping Engram's speed can develop him into a playmaker at the NFL level.

Character issues notwithstanding (Conley was accused of sexual assault just days ago), Conley is the latest cornerback in a draft heavy with talent in the secondary.  With a 4.4 40 yard dash, he adds some much-needed speed to Oakland's defense.

Cleveland was looking to bolster their defense in this year's draft, and is already looking loads stronger with DE Myles Garrett and Peppers on the roster.

The defending Super Bowl Champions aren't missing a beat, and it's no secret they were looking to bolster their pass rush after quarterback Tom Brady and the Patriots took them for a ride in the first half of the Super Bowl last year. He's still rehabbing from shoulder surgery, so it may be a while before his impact is really felt.

The latest graduate of "Defensive Back University," Buffalo adds another dynamic cornerback to this year's draft roster.

The first defensive end taken by the Cowboys in over a decade, Charleton is exactly the kind of player the Cowboys were hoping to take  in order to shore up their edge rush.

Just 20 years old, Njoku plays well beyond his years. He's the latest tight end in a long line of Miami standouts, and looks to continue his stellar play at the next level.

The Watt legacy is complete, with all three brothers soon to play in the NFL. He's got a lot to live up to, but anyone who shares genes with J.J. Watt has the potential to be a difference maker.

Foster has an endurance few linebackers do, and few analysts thought he would slip so far in the first round. With the second-most tackles in the SEC, San Francisco is hoping they've found an every-down back in Foster.

A Division III transfer, it's been a long road to the NFL draft for Ramczyk, who was a key blocker for Wisconsin's running backs last year. Wisconsin never fails to turn out big, bruising run blockers, and Ramczyk is no exception.