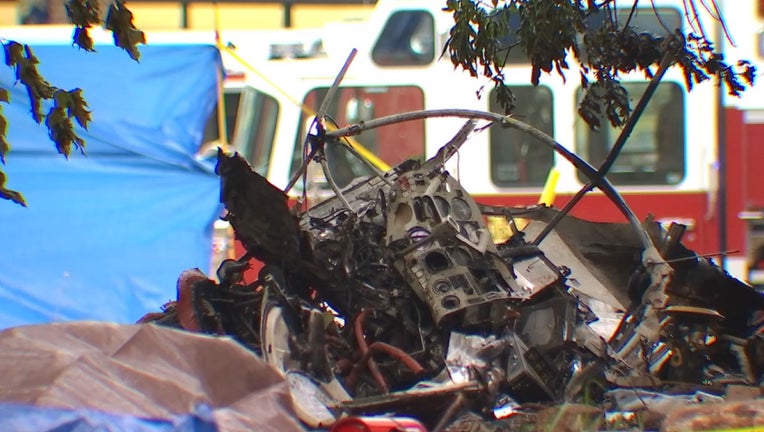 VICTORIA, Minn. (FOX 9) - The unthinkable brought a neighborhood near downtown Victoria together on Saturday afternoon. Three people were killed when a single-engine plane came down in the area and scattered debris across town.

"You just don’t expect planes to fall out of the sky and it was very close to home for us," eyewitness Ron Larson said.

After taking off from the Alexandria Municipal Airport, on a route to Eden Prairie’s Flying Cloud Airport, surveillance video shows the single-engine plane crashing into a vacant lot, before damaging a nearby home at about 5:40 pm.

Two people inside the home made it out safely, but three people on board the plane were killed.

"A piece of metal landed right near me which was rather rattling," Larson said. "And then there was quite the fireball."

Many neighbors were outside just before the crash, and together they watched as the plane came down, knowing there was nothing they could do about it.

"Our sole focus for us out in the yard was holy crap what are we looking at right now," eyewitness Matt Hoffman said. "And then the next thing I remember hearing was the impact and the big plume of smoke."

Before crashing, eyewitnesses say the plane appeared to fall apart in the sky.

"The whole plane was twirling," Hoffman said. "The wings were battered up like it had hit something or they were being ripped off, and that was making the whole plane just spiral."

Neighbors shared photos with FOX 9 of debris they found scattered throughout their yards before the crash farther down the road.

"It was so fast, unbelievably fast, it came right in," Larson said. "There was a pop sound so there was something that seems to be mechanical."

"Quite a bang, so it kind of shook us up," Frey added.

The National Transportation Safety Board has taken the lead on the crash investigation and in 12 days they expect to have a preliminary crash report, but the final report and cause of this tragedy won’t be released for another one to two years.