PHOENIX - The NBA has asked a law firm to investigate the Phoenix Suns after a published report on Thursday detailed allegations that owner Robert Sarver has a history of racist, misogynistic and hostile incidents during his 17-year tenure in charge of the franchise.

The report by ESPN NBA writer Baxter Holmes published on Nov. 4 says ESPN talked to dozens of current and former team employees for the story, including some who detailed inappropriate behavior by Sarver. Most of the allegations are from anonymous sources but a few are on the record.

In ESPN’s report, Sarver denied or disputed most of the allegations through his legal team. The Suns also strongly denied the report in a lengthy statement released Thursday.

"I would entirely welcome an impartial NBA investigation which may prove our only outlet for clearing my name and the reputation of an organization of which I’m so very proud," Sarver said.

Sarver will get his wish. The NBA released its own statement from executive vice president of communications Mike Bass saying the allegations were "extremely serious" and that the league has asked the Wachtell Lipton law firm to "commence a comprehensive investigation."

"The NBA and WNBA remain committed to providing a respectful and inclusive workplace for all employees," Bass said. "Once the investigation is completed, its findings will provide the basis for any league action."

Among the allegations: Former Suns coach Earl Watson said the Sarver was upset that Golden State forward Draymond Green used the N-word during a game in 2016 and that the owner repeated the N-word several times when voicing his displeasure. Watson said he told Sarver that he can’t use that word.

Watson was the Suns’ coach for all or part of three seasons before being fired three games into the 2017-18 season.

Sarver said in his statement that Watson was "clearly not a credible source."

"While there is so much that is inaccurate and misleading in this story that I hardly know where to begin, let me be clear: The n-word is not part of my vocabulary," Sarver said. "I have never called anyone or any group of people the n-word, or referred to anyone or any group of people by that word, either verbally or in writing. I don’t use that word."

The report also details a story about how Sarver passed around a picture of his wife in a Suns bikini to employees. The report says more than a dozen employees also said Sarver had a history of "making lewd comments in all-staff meetings."

In ESPN’s story, Bass said the NBA had not "received a complaint of misconduct at the Suns organization through any of our processes, including our confidential workplace misconduct hotline or other correspondence."

"Breaking: The NBA is preparing for a massive story accusing #Suns owner Robert Sarver of racism, sexism and sexual harassment in a series of incidents, sources say. With enough evidence to support such claims, there’s a real chance the league would forcibly remove Sarver," Schultz tweeted on Oct. 22.

The Suns called the claims "baseless," saying evidence the management team has, as well as eyewitness accounts, contradicted Schultz's claims.

"We urge everyone not to rush to judgment here. Especially based on lies, innuendo, and a false narrative to attack our organization and its leadership," the team said.

Sarver — a Phoenix businessman — has owned the Suns since 2004. He also owns the WNBA’s Phoenix Mercury.

The franchise is coming off one of the most successful seasons in its history, making the NBA Finals with stars Devin Booker, Chris Paul and Deandre Ayton before losing in six games to the Milwaukee Bucks. The Suns have made the Finals three times, in 1976, 1993 and 2021, but have never won a championship. 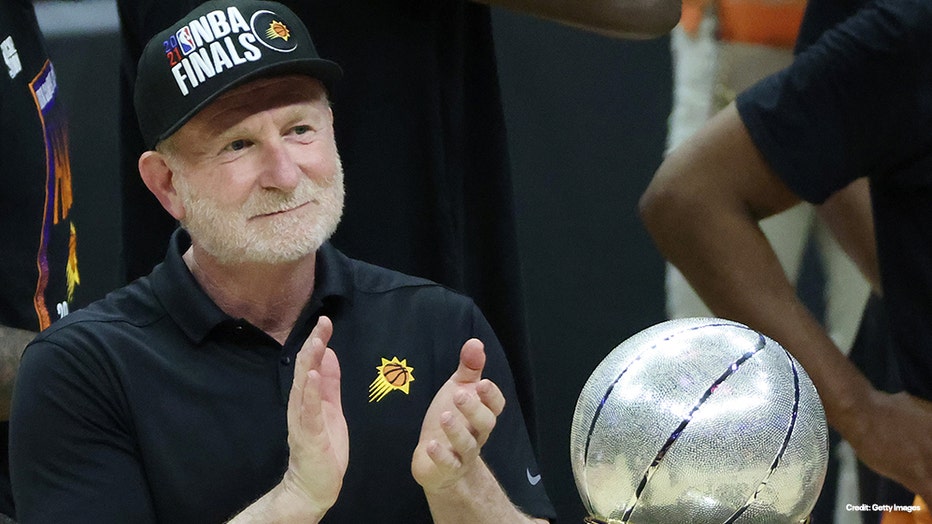 Hours after the ESPN report was published, fans of the Phoenix Suns are speaking out.

"I saw, like, the tweet about two weeks ago, they said two weeks ago tomorrow, so I've been waiting for it to happen. Just wasn't expecting it today," said Kassi Martin.

"At the end of the day, we need conclusive stuff that says is this really the toxic environment, or is this disgruntled employees not happy at their job?" said Greg Mackey.

Taryn Zelays says if the allegations are true, she hopes the team's ownership will change.

"Last year, we just had George Floyd and all the protests, so clearly, racism is a problem and people that go out and think they can say the N-word and use it out of context, it's not OK. It's a continuing problem in our country," said Zelaya.

Some fans, however, say the team's owner deserves the benefit of the doubt before findings are released.

"I think he's earned it, and that was not the popular opinion five years ago when everybody still thought he was a cheapskate and terrible owner. He’s proven that to be wrong, so maybe it will come out in the wash that he won't be so guilty in this," said Bob Bernet.

"I continue to be shocked by the false reporting from Baxter Holmes.  While there is so much that is inaccurate and misleading in this story that I hardly know where to begin, let me be clear:  The n-word is not part of my vocabulary.  I have never called anyone or any group of people the n-word, or referred to anyone or any group of people by that word, either verbally or in writing.  I don’t use that word. It is abhorrent and ugly and denigrating and against everything I believe in. The way I lead my personal and professional life makes that clear.  Instead of reporting the truth, Holmes’ story is based on misrepresentations from former Suns coach Earl Watson and other unnamed "sources."   Mr. Watson created an unprofessional and toxic atmosphere in our organization.  He is clearly not a credible source.  Despite hearing from witness after witness that disputed Mr. Watson’s stories, Mr. Holmes completely disregarded the truth here.  Now we are in the position of trying to disprove things that did not happen.

At this point, I would entirely welcome an impartial NBA investigation which may prove our only outlet for clearing my name and the reputation of an organization of which I’m so very proud."

"None of what’s been said describes the Robert Sarver I know, respect and like – it just doesn’t."

"The Phoenix Suns and Phoenix Mercury organization vehemently reject the claims made in today’s ESPN article.  Our two organizations have always worked hard to create an environment that is respectful and diverse; where racism, sexism and damaging behavior of any kind are not condoned.

Today’s story contains false information and narratives perpetuated by a reporter who has struggled unsuccessfully to match the facts to a story he decided he wanted to tell a year ago.  He twisted statements and circumstances to fit his preconceived narrative.  He broke every rule of journalism by first deciding on his findings and then cherry-picking events and unreliable sources to prop up his demonstrably false claims.

Former and current Suns employees and members of their families have shared their concerns with some of Mr. Holmes’s tactics.  We were disappointed to see that instead of relying on legitimate sources of information, Mr. Holmes relied on the say-so of a disgruntled former coach to make completely false claims and to damage our hard-earned reputation.  Numerous eyewitnesses – including former Suns president Lon Babby, John Shumate, and Alvin Gentry – told Mr. Holmes, in no uncertain terms, that they never witnessed the conduct he described.

We retained defamation counsel after it became clear that Mr. Holmes’s reporting was plagued by journalistic failures.

We have been put in the position of trying to disprove things that didn’t happen.  From a personal perspective, the Robert Sarver I’ve worked alongside of for 15 years is not a racist and he’s not a sexist.  He’s a hard-driving, competitive and compassionate man, and I’m proud to work with him. During Mr. Sarver’s tenure, the Suns/Mercury have been a leader among sports teams in the hiring of minority, LGBTQ, and female executives. The language attributed to him – many times by anonymous sources – is a complete fiction.

We take seriously any accusations of racism, sexism, or harassment of any kind – they have no place in our organization and are not tolerated.  The Suns and Mercury are committed to providing a respectful, fun and gratifying office environment.  Through the years, we have followed all evolving best practices to ensure our employees have healthy work/life balance.

It’s important to us and to me that every employee feels they play a central role in building something special. In the workplace, we’ve always tried to foster a diverse and inclusive workforce that prides itself on treating and paying our employees fairly and providing for their upward mobility.  Just a few examples of the policies and training we offer employees include our Respect in the Workplace Policy and associated training, sexual harassment training, diversity and inclusion training, and a robust learning management system aimed at advancing professional development.  We have a track record of hiring and promoting women, racial minorities, and LGBTQ candidates in roles that have been predominately held by men.

Our organization and the NBA also conduct workplace engagement and satisfaction surveys on a routine basis.  Our most recent NBA–sponsored workplace satisfaction survey of our full-time employees conducted in 2020 reflected a 90% satisfaction rating.   We have a track record of identifying areas of improvement from our surveys and taking action to create an even better workplace.  We are also very clear in our communications to employees regarding the fact that these surveys and responses are anonymous and that in no case will employees suffer negative consequences from providing feedback on the surveys.

It is also important to note that the NBA put in place an anonymous employee tip line in 2018 to report workplace issues at the team level.  To date, the NBA has never received any complaints in these areas regarding our organization.

Given ESPN’s and Mr. Holmes’s failure to report the facts, we welcome any investigation by the League to review and respond to these false accusations."

"The Phoenix Suns is a national treasure that belongs to all of us as fans and residents of our community. Team investors are simply temporary stewards of this treasure. Although today's revelations fall under the jurisdiction of the League which decides and takes any action based on its finding, I offer my support to ensure there is full accountability."

Tune in to FOX 10 Phoenix for the latest news