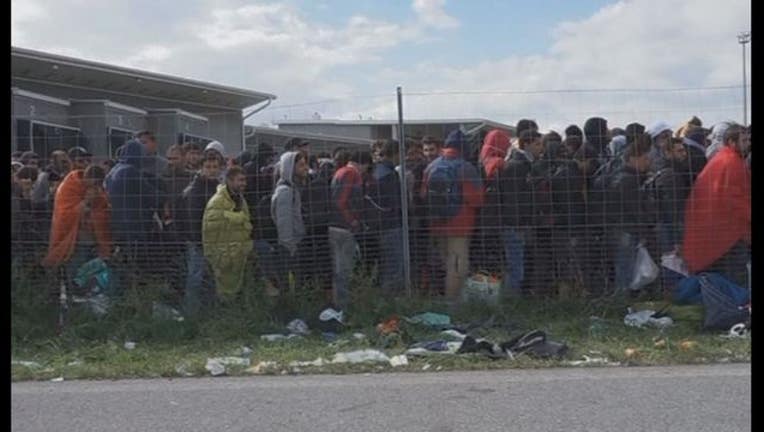 BEIRUT (AP) -- Syrian rescue workers who operate in opposition areas say at least 100 people were killed in a blast that ripped through a bus depot where evacuees waited to be transferred to government areas.

The Syrian Civil Defense in Aleppo province, also known as the White Helmets, says its volunteers were able to remove at least 100 bodies from the scene of the blast. The huge explosion earlier Saturday came as a much criticized population transfer deal stalled as the government and rebels bickered over who should be evacuated.

Syrian state media said at least 39 were killed. A rebel official says at least 30 of his opposition fighters who were guarding the evacuees were killed in the blast.

Syria state TV says a population transfer has resumed after a major blast killed dozens, and dozens of wounded were transported to government areas.

Al-Ikhbariya TV said 48 wounded were transported in exchange for allowing five buses of residents from opposition areas head toward a rebel-controlled province.

The blast earlier Saturday killed at least 39 people and wounded dozens. The major blast hit a bus depot in a rebel-controlled area where residents of pro-government towns have arrived late Friday. They were being evacuated as part of a population transfer that had stalled as government representatives bickered with rebels. The two sides disagreed on the number of fighters to be evacuated from four areas.

Those killed included civilians as well as rebel fighters. The government blamed the rebels for the attack.

A Lebanese TV channel close to the Syrian government is airing footage showing new buses arriving at an evacuation point that was site of a major explosion that killed dozens.

Al-Manar TV says the buses arriving late Saturday are to replace those damaged by the explosion that left at least 39 killed. A war monitor, the Syrian Observatory for Human Rights, says 43 were killed in the blast that hit the al-Rashidin area, on the edge of Aleppo city. The area controlled by rebels was hit by a car bomb as buses carrying thousands of evacuees from pro-government areas were stuck after a population transfer deal stalled.

The much criticized deal is to transfer thousands from besieged pro-government and anti-government areas. Critics say the deal amounts to "demographic engineering."

Syrian TV says at least 39 people were killed Saturday in an explosion that hit near buses carrying people evacuated from a besieged area of government loyalists. A war monitor puts the death toll at 24 in the area controlled by opposition fighters.

The explosion Saturday was caused by a car bomb, according to Syrian TV and the opposition Britain-based Syrian Observatory for Human Rights, causing massive destruction. In footage aired on Syrian TV, bodies were strewn outside buses, including fighters. Some buses were charred and other gutted from the explosion as belongings hanged out of windows.

The explosion hit an area where buses carrying nearly 5,000 people from Foua and Kfraya, villages in northern Syria that have been besieged by rebels. They were evacuated Friday, along with more than 2,000 from Madaya, a town outside of Damascus which was besieged by government forces.

State TV and an opposition monitoring group say the car bomb left an undetermined number of people killed. A photo carried by al-Ikhbariya state TV showed a number of bodies strewn on the floor with a huge plume of black smoke rising in the background.

The buses carrying nearly 5,000 pro-government evacuees have been stuck in an area on the edge of Aleppo city, as a much criticized population transfer deal stalls. According to the deal, more than 2,000 residents, activists and gunmen from areas besieged by government forces were also evacuated. But as the government and rebels disagreed over the number of gunmen to be evacuated, the buses were left stuck at two separate parts, but adjacent parts of the city.

Activists and residents say thousands of Syrians evacuated from their besieged towns have spent the night on buses at an exchange point as a much criticized population transfer deal stalls.

Ahmed Afandar, a resident evacuated from his hometown near Madaya, says dozens of buses carrying children, women and men are not allowed to proceed toward rebel-held Idlib as planned. He said it is not clear what hinders the completion of the evacuation.

Rami Abdurrahman, head of the Britain-based Syrian Observatory for Human Rights, says the Syrian government and rebels who negotiated the deal have differed over the evacuation of gunmen from the towns.

A resident of Zabadani, another rebel-held town to be evacuated, Amer Burhan says no evacuation has taken place from there.