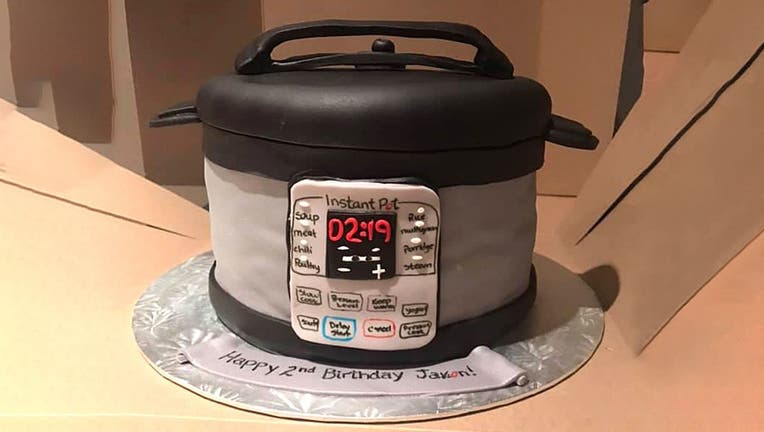 Kristyn Miller’s son Jaxon was turning 2, and instead of a more traditional birthday cake, Kristyn decided to get something that really spoke to her son’s unique interests: an Instant Pot. (Photo: Kristyn Miller)

(FOX NEWS) - This cake was an instant hit.

Kristyn Miller’s son Jaxon was turning 2, and instead of a more traditional treat, like perhaps a zoo animal or car-themed birthday cake, she decided to get something that really spoke to her son’s unique interests: an Instant Pot.

“Over time, Jaxon started mimicking the sound of the pressure release and it got to the point where he would patiently wait for the recipe to cook and throw a tantrum if I removed him from the kitchen while we waited,” she told the Kitchn.

In a Facebook post, Miller, from Winnipeg, Manitoba, shared a picture of the flawless cake and noted that her son is “obsessed” with the kitchen gadget. She actually said he's been enthralled with the family's Instant Pot for a while, which prompted the idea for the unusual cake.

“He has been OBSESSED with the instant pot for many many months. In fact, he used the box to learn to walk,” Miller wrote on an Instant Pot Community Facebook group page.

“He makes a brilliant pressure release sound that he loves, as well as all the beeping and counting down,” she added.

Miller explained that she commissioned the cake from Brandi’s Baking, in Lockport. The bakers even used fondant to create a timer reading “2:19," representing Jaxon turning 2 in 2019.

The cake, the mom shared, went over great with friends and family — as well as the birthday boy himself.