MINNETRISTA, Minn. (FOX 9) - Right now, 52 infants are on the waiting list for a heart transplant in the United States. Three-month-old Elodie Baker of Minnetrista is one of them.

She's the only child under the age of one from Minnesota waiting for a heart transplant and has already spent more time in the hospital than most grown adults.

Minnetrista infant is the youngest Minnesotan waiting for heart transplant

A Minnetrista infant is the youngest Minnesotan waiting for heart transplant.

Her mom, Kate Baker, is a medical malpractice attorney who has dealt with a number of injury cases. She and her husband, Collin, took every precaution before their first child arrived. 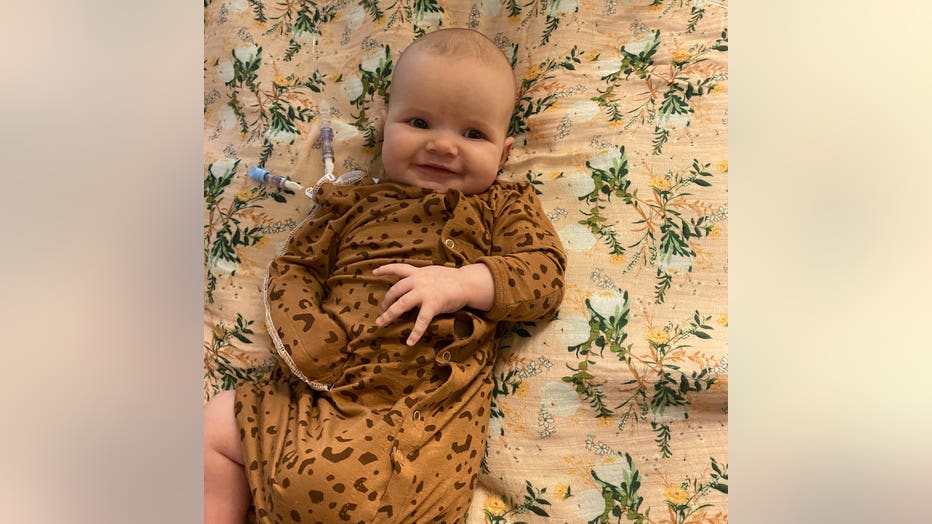 Elodie Baker is the youngest Minnesotan on the transplant waiting list for a new heart at three months old.

But when Elodie was about seven weeks old, Kate sensed something was off when her baby refused to eat.

"She just let out this shriek and my heart dropped," Kate said.

At first, Kate thought it could be respiratory syncytial virus (RSV), so they went to a local emergency room where doctors took an X-ray of Elodie as a precaution.

"They saw that her heart was enlarged, and they put us in an ambulance and sent us down to Children's Hospital in Minneapolis, and we have been living in the hospital ever since," Kate said.

Elodie was diagnosed with pediatric dilated cardiomyopathy, a rare disease that can't be treated with surgery or medicine.

She's now the youngest Minnesotan on the transplant waiting list for a new heart.

"We don't know why it happened, but all we can do is advocate for her now and hope that she gets through this and that she is transplanted and that we get to be her parents for a really long time," Kate said.

As she waits, Elodie is being treated at Lurie Children's Hospital in Chicago, but there's no telling exactly when a new heart may be available. 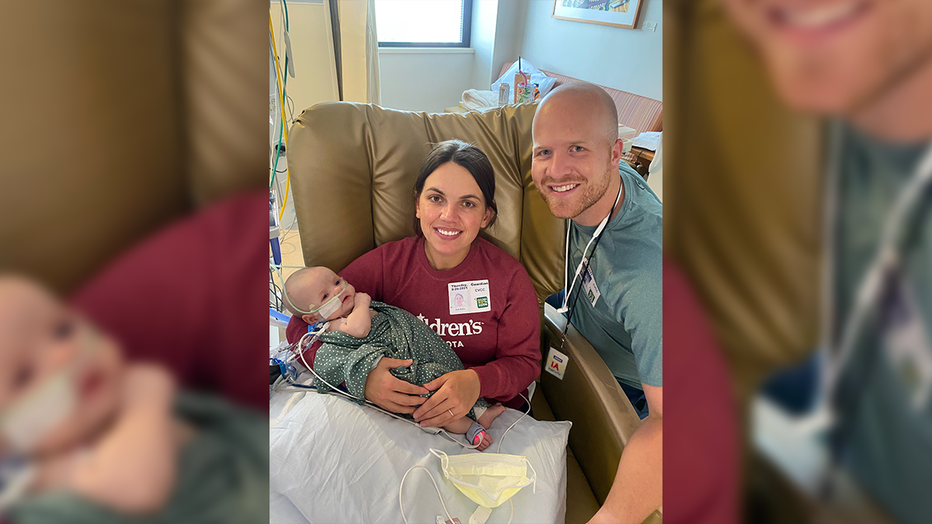 Three-month-old Elodie Baker from Minnetrista, Minnesota with her parents, Kate and Collin.

The system is based on compatibility, geographic location and time spent on the waitlist, and her transplant would need to come from another child who is around her size.

"It's very tough to wish for her to get a heart because of the nature of it, but we just have to try and focus on Elodie," Collin said.

Her parents hope by sharing her story, people will continue to cheer Elodie on and realize transplants are truly a gift of life.

"The number one thing that we hope comes from this is for people to register as donors," Kate said. "One person has the capacity to save eight lives and that's a lot. It would help so many people and that would mean a lot to us and to Elodie."

Her parents have established a Caring Bridge site so supporters can follow her journey.

You can find more information on how to become an organ donor at the following sites: