Last month, Minnesota required all state government workers who report to jobsites get vaccinated, or do weekly testing. State officials said Wednesday that 500 people had not agreed to either. The officials said they would consider how to make testing easier for unvaccinated workers, including at-home tests.

ST. PAUL, Minn. (FOX 9) - Almost all Minnesota state government employees are either vaccinated against COVID-19 or are being tested weekly for the virus, but a small number who aren't face disciplinary action.

In September, Gov. Tim Walz's administration said state workers who report to jobsites must have their shots or consent to weekly testing. It was a test case for how a vaccine requirement would work, as numerous private employers set their own mandates to take effect this fall.

More than 73 percent of the state's 25,357 workers subject to the policy have since shown proof of vaccination. The state has more than 37,000 workers, but the policy doesn't apply to those who work from home. Of the 6,700 employees who aren't vaccinated, almost all have agreed to testing.

Just 523 unvaccinated state workers have refused weekly testing, Minnesota Management and Budget Commissioner Jim Schowalter said in a Wednesday letter to state senators. Four workers are in the disciplinary process, though the state's definition of discipline doesn't include unpaid leave.

Liz Schwanke, a Community Based Services employee who works with the Department of Human Services, said she was forced to take unpaid leave in September after declining to take COVID tests in front of her supervisor.

"It's not too late to make things right and give us the respect we deserve," Schwanke said at a Senate Human Services committee hearing Wednesday. "All we want is our health privacy to be respected, and I don't think that's too much to ask."

Walz told reporters later in the day that he didn't think any employees were on unpaid leave. Schwanke then provided documentation from DHS ordering that she was "not authorized to enter the workplace and will be placed on unapproved and unpaid status."

A spokeswoman for Minnesota Management and Budget declined to say how many state employees are on unpaid leave.

Walz dismissed the concerns as coming from a small fraction of the state's workforce. He said the Republican-controlled Senate should be focusing on the thousands of state workers who had gotten a vaccine.

"I'm sure, like in anything, there are some folks frustrated or whatever," Walz said during an event in Maplewood. "The best thing is to take the vaccine. There may be a legitimate reason you're not, and we certainly acknowledge that. The simple thing to do is a simple test." 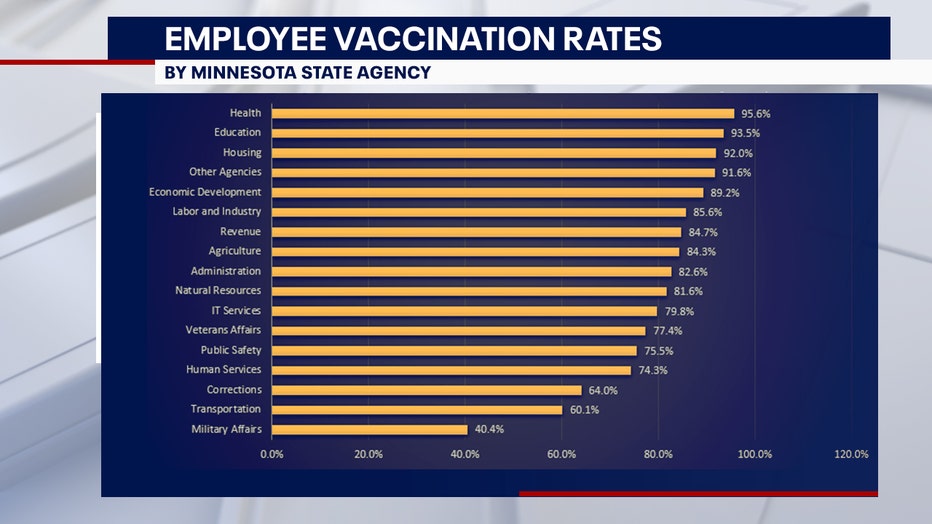 At the state Health Department, the vaccination rate is 95.6 percent among the 1,187 workers who report to jobsites. Conversely, the Minnesota Department of Transportation's 3,847 in-person workers are just 60.1 percent vaccinated.

State officials said they would consider making it easier for unvaccinated workers to be tested, including at-home tests. The state's workforce is spread out at numerous jobsites and each agency is handling its own testing process.

"It is no shocking to me that we may have a little work to do around the physical setup of how we administer testing," said Kristin Batson, deputy Management and Budget commissioner.

Republican senators raised concerns that the vaccine-or-test mandate would lead to a worker shortage, though state officials refuted the idea.

Chuck Johnson, the deputy Human Services commissioner, said his agency is "not at all in the position" of a shortage right now. Human Services has the most employees of any state agency.

"I strongly suggest you restore their lost dollars and their pay," said Abeler, R-Anoka. "If a person is like, 'No, I'm not doing this,' that is such a rare case. You can deal with that in your regular discipline."