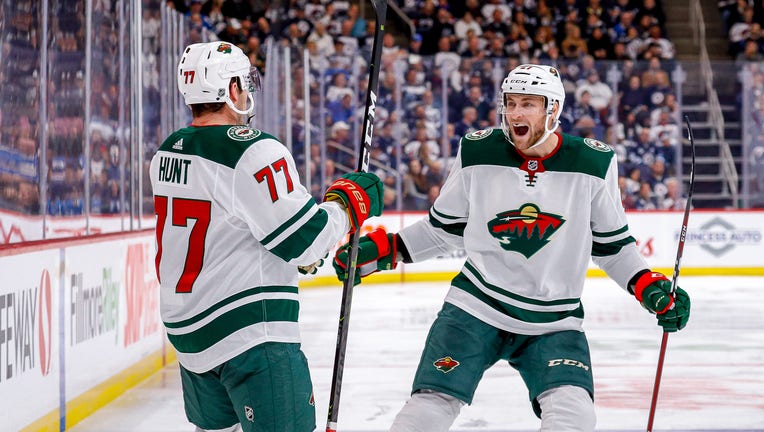 WINNIPEG, MB - OCTOBER 10: Brad Hunt #77 and Carson Soucy #21 of the Minnesota Wild celebrate a third period goal against the Winnipeg Jets at the Bell MTS Place on October 10, 2019 in Winnipeg, Manitoba, Canada. (Photo by Darcy Finley/NHLI via Getty

ST. PAUL, Minn. (FOX 9) - The Minnesota Wild are set to drop the puck at home for the first time this season on Saturday.

The Wild will face off at home against the Pittsburgh Penguins. The home opener starts at 7 p.m. at Xcel Energy Center, but the team is celebrating with a day's worth of activities.

The Wild started the day by giving out thousands of pieces of donated hockey equipment to support local youth groups.

Due to inclement weather, the team had to cancel a pre-game party, but will still hold a march at 6:30 p.m. Fans can join the team in bringing the "State of Hockey" flag from Tom Reid's Hockey City Pub to Xcel Energy Center.

At the arena, the team will host a happy hour along with an autograph session in the hour before players take the ice.