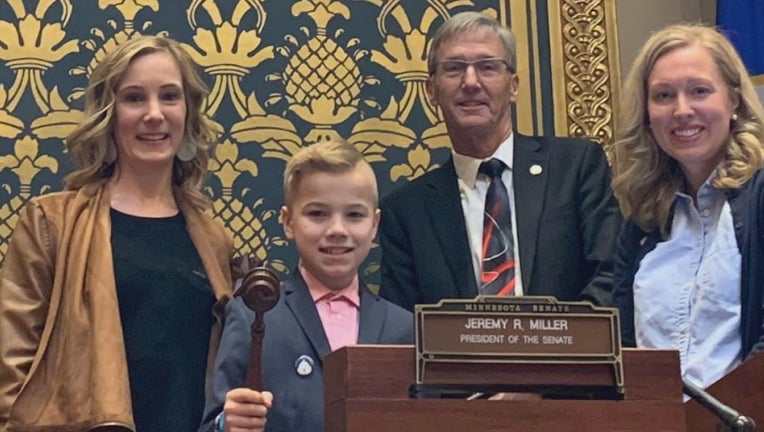 Kelly King (left) and her son Kade King went to the Capitol to push for a bill to allow her son to be administered CBD oil at school. (Kelly King)

CHASKA, Minn. (FOX 9) - A Chaska, Minnesota mother is fighting at the state Capitol so that her son, who has epilepsy, can get the medicine he needs at school in case he has a seizure.

Twelve-year-old Kade King gets on the bus in the morning and for about seven hours does not have what he needs to stop a seizure. His mother, however, is working very hard to get through the roadblock that she says is putting his life and others at risk.

A Chaska, Minnesota mother is fighting at the state Capitol, so that her son, who has epilepsy, can get the medicine he needs at school in case he has a seizure.

Kade is a happy and generally healthy sixth grader, but his mom worries what will happen if he has a seizure at school. His first seizure was at school back in 2017. Since then, he’s had many more.

“Usually he’s standing up and kind of starts twisting,” said Kelly. “We start yelling his name and he doesn’t respond and drops dead to the ground, usually hits his head, gets a hematoma and it’s pretty violent shaking on the ground.”

The Kings tried three different epilepsy medications, but Kade had life-threatening reactions to all of them. There are two things that do work: medical marijuana and CBD oil.

“We grab our CBD, pop it in his mouth and then within 20 - 30 seconds his body stops shaking, his breathing kind of comes back to a normal rhythm,” said Kelly.

When Kelly contacted Kade’s school, she quickly learned school nurses cannot administer CBD oil or medical marijuana. That’s why she and Kade have been to the Capitol. With the help of Senator Scott Jensen (R-Chaska) and others she is fighting to pass a bill that would allow school nurses and staff to administer medical cannabis to Kade if he has a seizure. Over 500 children aged five to 17 years old are enrolled in the medical cannabis program

“This would bring so many families comfort as they send their children out the door every day,” said Kelly.

For now though, Kade gets preventative dosing in the morning and evening. Kelly is hoping that’s enough.

“I just know that’s God’s got us and I have a lot of faith and I hold onto that really tightly and I just have faith that it’s all going to work out how it’s supposed to,” she said.

There is opposition to the bill as there are concerns over safety and dosing. Some believe allowing medical cannabis or CBD oil would open up the door to allow other substances to be administered. Currently, the Senate version of the bill does not have a hearing scheduled. Senator Jensen is hoping that changes or that he can include it in end of session negotiations.