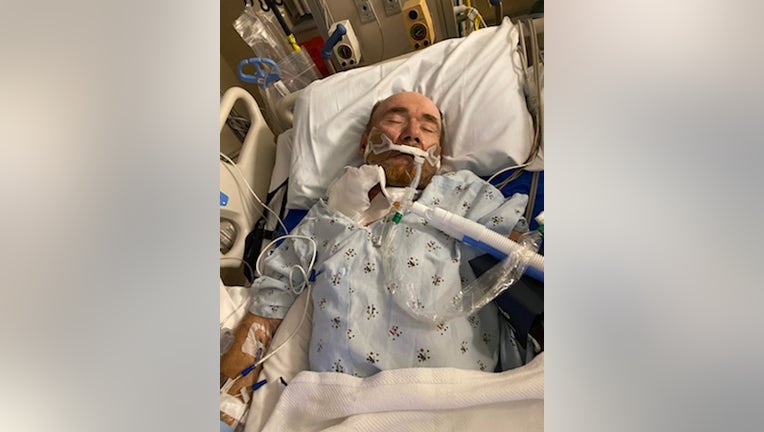 Willie Charpenter was rushed to the hospital after a large stick lodged into his neck during an ATV ride in Bruno, Minnesota.

BRUNO, Minn. (FOX 9) - Willie Charpenter was riding on an ATV trail for a 9/11 memorial ride near Bruno, Minnesota this weekend when he was punctured in his neck with a 1.5-inch stick that went about six inches into his body.

A Minnesota man survived after a large stick got lodged in his neck while he was riding an ATV.

Morgan says he was driving the ATV, and his uncle was in the passenger seat. Morgan says, out of nowhere, brush started filling the cab of the ATV.

Morgan said he heard his uncle yell out that he had been hurt and a stick was in his throat. When Morgan stopped, he saw a stick coming out of his neck.

"One-and-a-half inches I think it was in diameter," Morgan said.

Morgan later learned the stick was about six inches inside Charpenter’s body. The stick had punctured a lung, but Charpenter was still able to talk and was mostly alert.

"He was saying his goodbyes to us. Willie was telling us he loved us," Morgan said.

The group was on a trail deep in the woods, and they didn’t have enough service to call 911. But, by using walkie talkies, they were able to connect with others in the group who drove out to a main road looking for service.

"The ambulance got there really fast, actually, the response time was amazing," said Dan Brown, a family friend who was part of the group working to call an ambulance.

The ambulance ended up driving down the ATV trail to try and meet Morgan and Charpenter and others. They needed to try and drive out of the woods, but were afraid any movement could make Charpenter’s injury worse.

Thankfully, a family friend who was with the group, Hailey Brown, is a registered nurse and helped keep Charpenter alert and worked to keep him in one place so the stick wouldn’t shift.

"She held his head still the whole time I had to drive to get to the ambulance," Morgan said.

After nearly three hours, Charpenter was airlifted to a hospital in Duluth were doctors removed the stick. Charpenter is still there recovering and is doing OK.

FOX 9 was there while Morgan talked to Charpenter on the phone. When asked how he was doing, Charpenter said "a little sore but thankful to be here."

A GoFundMe page has been started to help Charpenter with his recovery.