It’s one of the most iconic images from World War II.

(FOX 9) - It’s one of the most iconic images from World War II. Joe Rosenthal's black and white snapshot of the flag raising at Iwo Jima became an enduring symbol of American resolve.

Minnesota man Bill Genaust was standing right next to him and shot film footage of the same event, but his name was lost to history until recently. 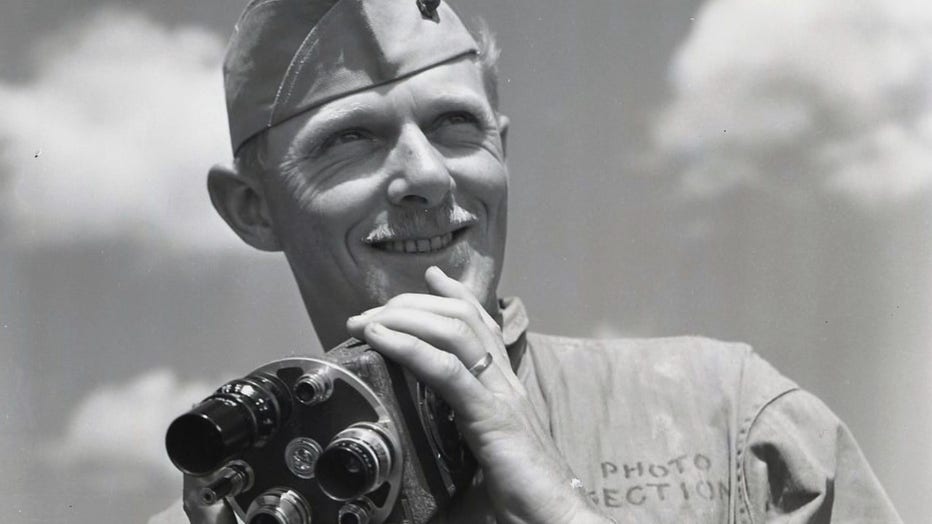 Bill Genaust, a Minnesotan, had a unique look at Iwo Jima.

Bill Morgan has made it his life's work to study history.

“This is the Iwo Jima sand - ash and sand. I guess it was ankle deep and slowed the men down on the beach and made them targets," he said.

But for Morgan, some of the footprints on the sands of time are all in the family.

"It reminds me of my cousin. I like to have it here."

Bill Genaust was born and raised in Pipestone, but moved to Minneapolis after he graduated from high school. There, he met and married his wife Adelaide and worked as an industrial photographer until he enlisted in the Marine Corps to become a military photographer.

"He was a very serious but warm-hearted man…a deep personality."

Genaust's first assignment was the battle of Saipan where he was shot in the leg during a firefight. Morgan was just 10 years old when he met his cousin for the first and only time while Genaust was home on leave recovering.

"I remember him sitting in our living room and a car backfired, and I can just see him rigid like that for someone who had been in combat."

Though Genaust could've stayed home, he volunteered to go to Iwo Jima where some 70,000 Marines were planning to take the south pacific island from Japanese soldiers so they could use it as a refueling station for long range bombers to reach Japan's mainland.

Armed with a 16 millimeter camera, Genaust was with the Marines’ 4th Division as they landed on the beach where they were pinned down by enemy fire from nearby Mount Suribachi.

After three days of bombardment by U.S. planes and warships, the Marines finally advanced on the former volcano on the southern tip of the island - and Genaust's date with destiny.

In silent film footage, we can see Iwo Jima through Genaust's eyes. We can see a tank training its sights on the rocky hill while Marines treated an injured Japanese soldier who had been flushed out of the caves. We can also see a handful of Marines heading uphill when a grenade explodes while a tense Marine looks around.

“Finding interesting signs and personnel, taking pictures and sending them back to the U.S. We would call them human interest."

On Feb 23, 1945, Genaust and Marine still photographer Bob Campbell were ordered to go to the top of Mt. Siribachi. On their way, they crossed paths with civilian photographer Joe Rosenthal, and the three made the 556-foot hike to the top of the hill.

When they arrived, Genaust filmed what seems like a simple act: six Marines raising the American flag over Iwo Jima. It signaled to U.S. forces the summit had been taken, but the images came to mean much more to a world at war.

In one photo, you can see Genaust on the left with his movie camera and Rosenthal on the right taking pictures of the Marines after the flag raising - which was actually the second one on Suribachi that day.

The first happened a few hours earlier when photographer Lou Lowery captured the first time an American flag was raised on Japanese soil during the war. But, a General thought that flag was too small, so he ordered a larger one raised so it could be seen by troops all over the island.

"It means that he captured an important part of American history. His movie version is one of the most widely reproduced images in the military or civilian history."

Rosenthal's black and white photo became arguably the most famous image of war ever shot and earned him the Pulitzer Prize.

Genaust's movie was shown in movie houses across the country to build support for the war, but he never lived to see the impact his images had on the American people.

Nine days later, Genaust was helping clear Japanese die hards who were hiding in the caves and tunnels in northern Iwo Jima. He brought his flashlight into one of the caves to help the Marines see, but he was shot and killed instantly.

“It was devastating for his wife. I think she tangled a little with the Marine Corps. He was called ‘missing in action’ for months before they finally said he died in the cave."

Genaust may not have gained the fame that Rosenthal did for his iconic photo, but Morgan is proud of the lasting legacy his 198 frames left behind.

“I admire him. He's a hero among a number of heroes because he did something that will stand forever, for anyone studying the history of that battle. He is a documenter, if you will. As a historian, I feel real strongly about things like that."

Genaust's body remains on Iwo Jima because it was deemed unrecoverable, but a bronze plaque was placed at the top of Mt. Suribachi to honor the sacrifice he made there.

He is also remembered every year when the Marine Corps Heritage Foundation gives out an award named after him to documentarians who advance and preserve Marine Corps history.