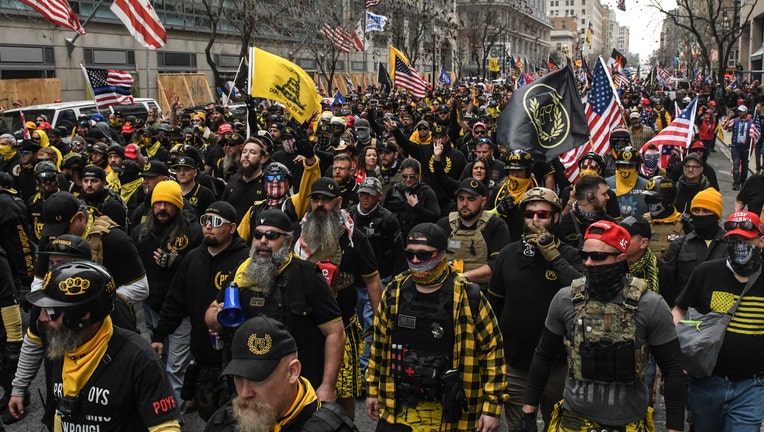 WASHINGTON, DC - DECEMBER 12: Members of the Proud Boys march towards Freedom Plaza during a protest on December 12, 2020 in Washington, DC. Thousands of protesters who refuse to accept that President-elect Joe Biden won the election are rallying ahe (Stephanie Keith/Getty Images)

WASHINGTON, D.C. (FOX 9) - A Minnesota man has been arrested and charged in connection with unrest that occurred during a pro-right rally in Washington, D.C. over the weekend.

Four people were stabbed during Saturday’s “Million MAGA March” in D.C., FOX 5 reported. The rally, which drew Proud Boys and other far-right activists, was meant to dispute the results of November’s presidential election.

The Metropolitan Police Department announced Monday that Cory Nielson, 39, of Robbinsdale was arrested on Sunday and has been charged with simple assault. Another suspect, 29-year-old Phillip Johnson of Northeast D.C. was arrested the day before and charged with assault with a dangerous weapon.

Washington, D.C. police are looking to identify additional suspects in connection with stabbings that occurred during a pro-right demonstration on Saturday, Dec. 12. (Metropolitan Police Department)

Police are still attempting to identify additional suspects in the case. The case remains under investigation.