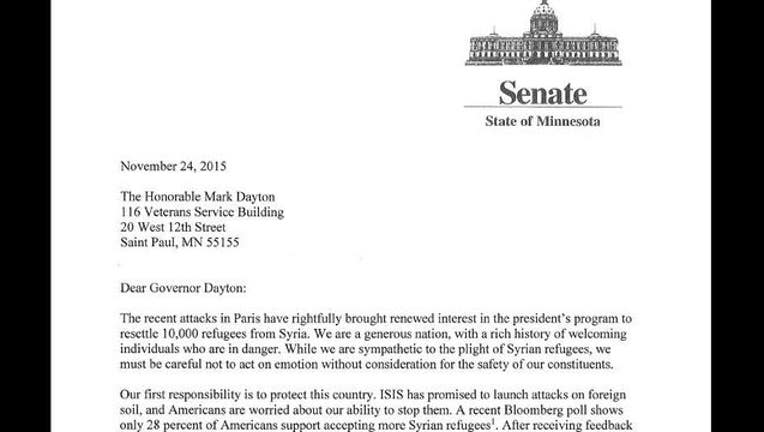 ST. PAUL, Minn. (KMSP) - Members of the Minnesota Senate Republican Caucus sent a letter to Gov. Mark Dayton on Tuesday asking him to temporarily halt the acceptance of Syrian refugees "until there are strong assurances that terrorists cannot enter the country surreptitiously."

“Gov. Dayton and his colleagues in the Democratic Party are not listening to the people of Minnesota regarding the Syrian refugee issue,” Sen. Torrey Westrom (R-Elbow Lake) said in a press release. “The message from our constituents has been clear: Minnesota is a welcoming place for refugees, but only after absolute vigilance.”

The recent attacks in Paris have rightfully brought renewed interest in the president’s program to resettle 10,000 refugees from Syria. We are a generous nation, with a rich history of welcoming individuals who are in danger. While we are sympathetic to the plight of Syrian refugees, we must be careful not to act on emotion without consideration for the safety of our constituents.

Our first responsibility is to protect this county. ISIS has promised to launch attacks on foreign soil, and Americans are worried about our ability to stop them. A recent Bloomberg poll shows only 28 percent of Americans support accepting more Syrian refugees. After receiving feedback from constituents, we believe that this is also true in Minnesota.

Given that terrorists have already snuck into our country posing as refugees; that Director of National Intelligence James Clapper warned that ISIS could infiltrate refugees; and that officials such as FBI Director James Comey and former House Intelligence Committee Chairman Mike Rogers have expressed concerns about our ability to fully vet refugees, it appears Americans have good reason to be concerned.

As of this writing, a bipartisan group of 31 governors have sent letters to the president rejecting Syrian refugees until we have indisputable assurances that there are no gaps in our screening process. We strongly encourage you to do the same. Minnesotans are counting on us to act.

There are more preferable options. In addition to asking the president to abandon his push to accept 10,000 more Syrian refugees, we request you ask him to aggressively explore establishing “safe zones” within Syria. These zones would offer protection to the families that are in danger while continuing to protect Americans, and all Minnesotans, from the unknown and obvious risk of terrorist slipping into our state and country.

We strongly support helping those in need. However, until we have absolute certainty that no terrorists are able to abuse our generosity and take advantage of the system, it is in our best interest to temporarily halt the acceptance of Syrian refugees. On behalf of all of our constituents and our state, please join us in this effort.