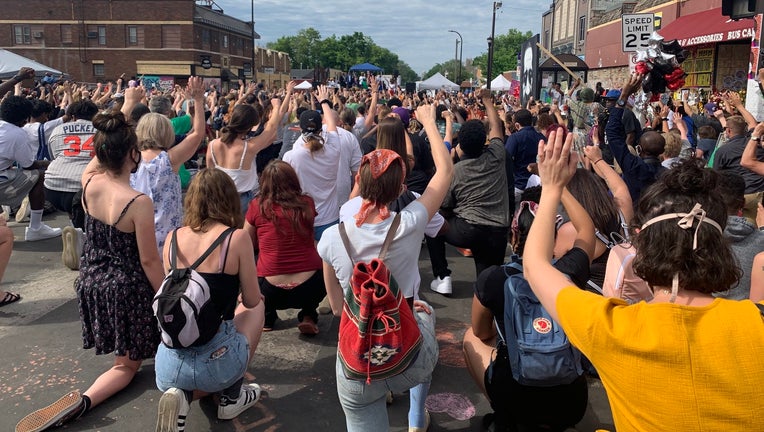 The crowd at 38th and Chicago kneels to pay respects to George Floyd.

MINNEAPOLIS (FOX 9) - A Minnesota bail nonprofit aimed at helping to get low income people out of jail is now facing mounting criticism of how the organization is using millions of dollars in donations.

As the Minneapolis riots in the wake of the death of George Floyd became international headlines, people from all over the world, including celebrities and community activists donated money to help bail out protesters.

A Minnesota bail nonprofit aimed at helping to get low income people out of jail is now facing mounting criticism of how the organization is using millions of dollars in donations.

More than $30 million was donated to the Minnesota Freedom Fund, a small nonprofit, that helps get low income people out of jail.

The organization only employs one fulltime person with the rest being volunteers. Normally, they have about $1,000 a day to help bail out folks. Now, with millions of dollars at hand, many are questioning what the Freedom Fund is actually doing with that cash.

“Minnesota Freedom Fund has paid every single protest bail in the Twin Cities that has been brought to our attention that has amounted to around $250,000 to date,” sais Simon Cecil, the organization’s founder.

Right now, the group is organizing where the rest of the money will go, but promises to be transparent as it is spent towards the Freedom Funds’ mission.

“We also know that for folks who have been arrested, there will be ongoing needs around their court cases and part of our work will be to support those folks,” Cecil said.

As the small nonprofit tries to add more people on staff to deal with the unprecedented amount of money flowing in to help those arrested during the protests, scrutiny over the Minnesota Freedom Fund is growing, even escalating to threats to its board members, hence why the bio page was scrubbed.

Cecil says the organization will be accountable for every dollar.

“To those who say we need to move faster we certainly hear their concerns and we will work to be transparent as we use the money and we are working to scale up and use that money rapidly,” Cecil said.