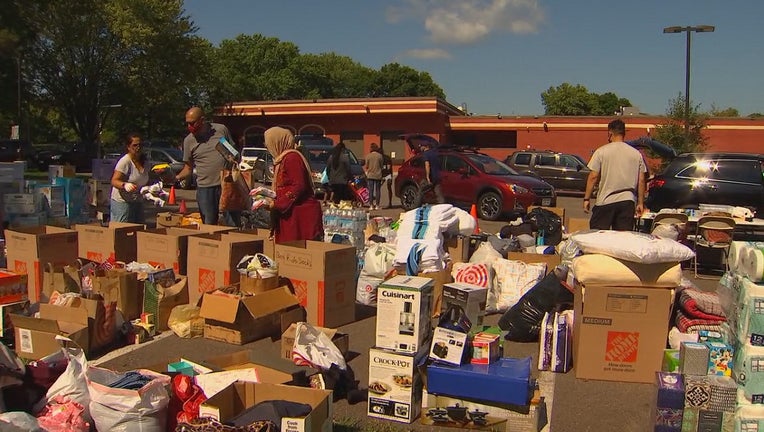 An Afghan-American family collected supplies for refugees in Minnesota on Sunday. (FOX 9)

PLYMOUTH, Minn. (FOX 9) - As tens of thousands of Afghan evacuees make their way to the U.S., Americans are making sure those refugees have what they need to start a new life here.

In Minnesota, boxes full of essentials were being loaded up to help local Afghan refugees. An Afghan-American with family still in Kabul is spearheading the effort.

As tens of thousands of Afghan evacuees make their way to the U.S., Americans are making sure those refugees have what they need to start a new life here.

"They’re struggling, they’re lost, they don’t know what to do there," said Sonia Anunciacion. "They’re calling us for help, but unfortunately there’s nothing we can do at this point."

Anunciacion was born in the United States and lives in Minnesota, but she is worried for family members who are trying to leave Afghanistan right now.

"We’ve sent money - the banks are closed. They’re just really scared, and we’re scared for them," she explained.

With no access to cash and the U.S. evacuation mission nearing a close, she’s not sure her family will make it out. But for those that do, she wants them to have what they need to start anew.

As of Friday, up to 3,000 Afghan refugees had already come through Fort McCoy in Wisconsin with thousands more expected. Anunciacion says she already knows of a couple of families who have settled in Minnesota. All this comes as threats of violence against Afghan citizens and the U.S. military continue including the U.S. carrying out a drone strike on a car full of explosives Sunday.

The airstrike is said to have killed a suicide bomber associated with ISIS-K. Back at the Northwest Islamic Community Center in Plymouth, all hope is not lost as donations continue to come in.

"It reminds me of the goodness in the world, and I’m so thankful," she said.

Sonia says they’ve received so many items, they don’t have much more room for physical donations. Instead, they are asking for things like Amazon gift cards.

Catholic Charities of the Diocese of La Crosse