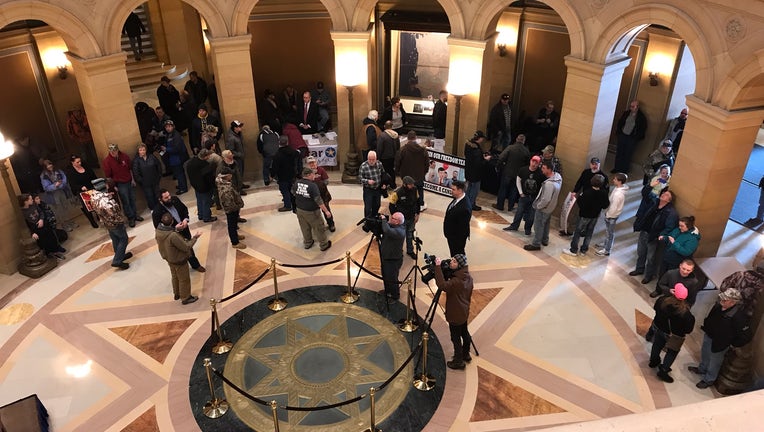 ST. PAUL, Minn. (FOX 9) - For the first time since 2013, a Christmas tree will be installed in the Minnesota State Capitol rotunda Tuesday.

The tree will be a 17-foot Fraser fir from Happy Land Tree Farms in Sandstone. Ken Olson, the farm’s owner, said he cut the snow-covered tree Sunday and wrapped it for the 90-mile journey to the Capitol.

The farm donated the tree and is delivering it around 11 a.m. Tuesday to a side door at the Capitol, said Karen Lanthier of the Minnesota Department of Agriculture.

Happy Land won the right when it had the champion Christmas tree at this year’s Minnesota State Fair.

Olson said it will be the first time he’s had a tree displayed in the Capitol rotunda. But the farm has supplied the governor’s office and attorney general’s office with trees before, he said.

Dating back to the early 1980s, a tree had been in the Capitol rotunda for the holidays. But state officials put a pause on the tradition for the $300 million renovation of the Capitol earlier this decade.

For the past two years, a Christmas tree has been installed on the Capitol grounds outside the building.

Unlike the quiet tradition in Minnesota, Capitol trees have generated controversy in neighboring Wisconsin.

This year, first-year Democratic Gov. Tony Evers decided to refer to the rotunda tree as a “holiday tree,” breaking with his predecessor, former Republican Gov. Scott Walker, who called it a “Christmas tree” during his eight years in office.

Minnesota also has a tree at the Governor’s Residence in St. Paul. Gov. Tim Walz has said there will also be a menorah at the residence.

Minnesota has 62 Christmas tree farms and lots around the state, Lanthier said.