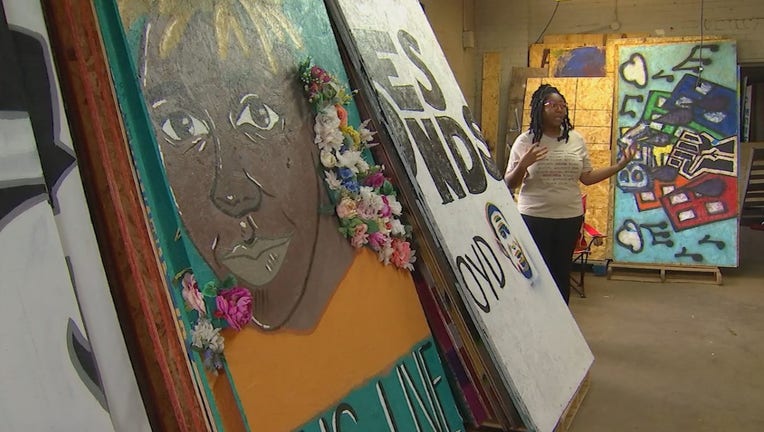 Save the Boards to Memorialize the Movement is collecting the plywood murals that were made after the death of George Floyd.

MINNEAPOLIS (FOX 9) - For the last 11 months, Leesa Kelly has been helping collect unique artwork inspired by the death of George Floyd.

Kelly and others have been collecting the plywood boards that were turned into murals throughout the Twin Cities. And while she’s proud of what they’ve accomplished so far, she knows their job is just the beginning.

For the last 11 months, Leesa Kelly has been helping collect unique artwork inspired by the death of George Floyd.

"I realize how much more work we have to do with the murder of Daunte Wright," she said. "There are more boards up now, just as many as were up with George Floyd's death."

After the unrest last summer, many artists saw boarded-up businesses as blank canvasses on which to express the pain and grief they were feeling. Kelly co-founded "Save the Boards to Memorialize the Movement" to preserve the works of art as historical artifacts.

"Everything in this room speaks to our collective pain and grief and trauma, and our need for change in Minneapolis and in this country. It’s so important we memorialize it, and also important we tell this story and keep their stories alive through the lense of Black and brown people who are most directly impacted by it," she said.

Greiner construction says many downtown businesses like the US Bank Plaza that boarded up during Derek Chauvin’s trial have put their boards in storage in case they need them again during the second trial. But, once they are done with them, Kelly hopes her group can take care of those boards, too - especially those with art or messages.

"Come to us. Call us. Email us. We want to help collect your boards and we want to help preserve the history that was on your storefront," she said.

In the meantime, Save the Boards to Memorialize the Movement will put 200 of the 800 boards they’ve collected on display at a park near 38th and Chicago in a couple of weeks. They hope seeing them all together for the first time will help the community heal.

"I just hope that people come out, and it’s an opportunity for them to kind of take it all in and hopefully we can walk away better."