A man wanted in connection with a Milwaukee homicide is dead after a police chase and downtown shooting late Friday, Sept. 2.

MILWAUKEE - A man wanted in connection with a Milwaukee homicide is dead after a police shooting downtown late Friday, Sept. 2.

The man, shot and killed by police in Milwaukee's downtown bar district following a lengthy high-speed chase around the city, is 47-year-old homicide suspect Ernest Blakney, according to the Milwaukee County Medical Examiner's Office.

Police have not confirmed it was Blakney, but had identified the man who was shot and killed as a 47-year-old homicide suspect.

Blakney was wanted for the homicide of his ex-girlfriend, 36-year-old Nikia Rogers. A warrant for Blakney's arrest was issued on Monday, Aug. 29. 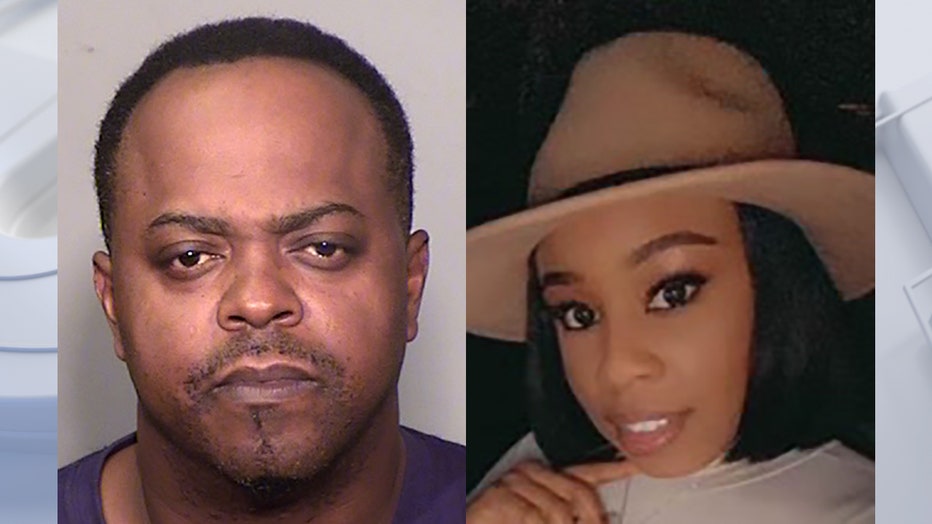 Officials said officers spotted a vehicle and suspect near 22nd and National shortly before 11 p.m. Friday. The vehicle, a pickup truck, and suspect were wanted in connection to the homicide. Officers tried to conduct a traffic stop, but the suspect refused to stop and a pursuit ensued.

The chase ended when the truck became disabled on Juneau Avenue just west of Water Street downtown. At that time, officials said the suspect got out of the vehicle and fired several shots at officers. Several officers returned fire, striking the suspect. The suspect, who police only identified as a 47-year-old homicide suspect but was identified by the medical examiner as Blakney, died of his injuries. His firearm was recovered.

The end of a dramatic police pursuit and police shooting of a homicide suspect was captured on cellphone by a person on Water Street.

Video from a citizen at the scene captured the end to a Milwaukee police chase and shootout that ended with a homicide suspect dead.

A bystander was also shot and wounded during the incident. That bystander, a 22-year-old woman from Hudson, was taken to a hospital for treatment. Officials say, at this time, it is unknown whose gunfire struck the woman.

No other community members or officers were struck by the gunfire.

Eight officers were involved in this incident:

Each officer will be placed on administrative duty as is routine in officer-involved critical incidents.

"We're still investigating that. We have to download everyone's camera and interview officers still. It was, it's code red night, right? Water Street, plus we have, you know, a lot of additional activity down here with the festivals, the Labor Day happenings. So there were a lot of officers here, so we have to go through everybody and talk to them," said Assistant Police Chief Nicole Waldner. "Actually I would say that comparatively speaking, it wasn't the Water Street – we were lucky, right? It wasn't the Water Street you guys have filmed in he past where you've seen tons and tons of people. We were lucky."

The Milwaukee Area Investigative Team will be investigating this incident. The Oak Creek Department will be the lead law enforcement agency in the investigation.

A community briefing discussing this incident will be released in the future.

The nightlife returned Saturday to the stretch of bars along Water Street near where the shooting took place.

Friday night, though, bargoers were confronted with something they could not believe. Peak party hours were interrupted by the sound of metal on pavement as the pickup truck barreled through the intersection.

"This is literally right as he decides to stop in front of Trinity, got out of the car and started shooting at the police," Victoria Jackson, who witnessed and filmed part of the incident on her phone, said.

"We were laying down on the floor in Trinity’s. We were all really scared, the cops were running through. We weren’t sure if it was going to be one of us next."

Pursuit of homicide suspect ahead of police shooting on E. Juneau Avenue, Milwaukee

Jackson, visiting from Eau Claire, was in line for the bar with some friends.

"I still can't believe it. I’m pretty shaky," she said. "I haven’t been to sleep, and just reading about some of the other things (Blakney) did."

The day after it happened, Jackson is thankful.

"It was crowded. It was packed down here," she said. "It’s crazy how it just happened right here in front of us."

FOX6 News spoke to Mayor Cavalier Johnson about the fatal shooting of a homicide suspect downtown. The shooting followed a pursuit, and there was an exchange of gunfire between the suspect and officers.

Prosecutors accused Blakney of shooting and killing Rogers before setting his home on fire near 83rd and Vienna on Aug. 25.

The Milwaukee police and fire departments were called to the home just before 4:30 a.m. for a "house fire." While working to put out the flames, the fire department found Rogers' body on the second floor of the home.

An autopsy found Rogers had four gunshot wounds caused by two bullets – shot in the head and back. The medical examiner's office ruled the gunshot wounds as the cause of death in the manner of a homicide.

A criminal complaint states the fire could have started in four different places: the detached garage, the basement, the first floor and Rogers' body. Her body had several burns consistent with having been set on fire, and police found a container of lighter fluid nearby. 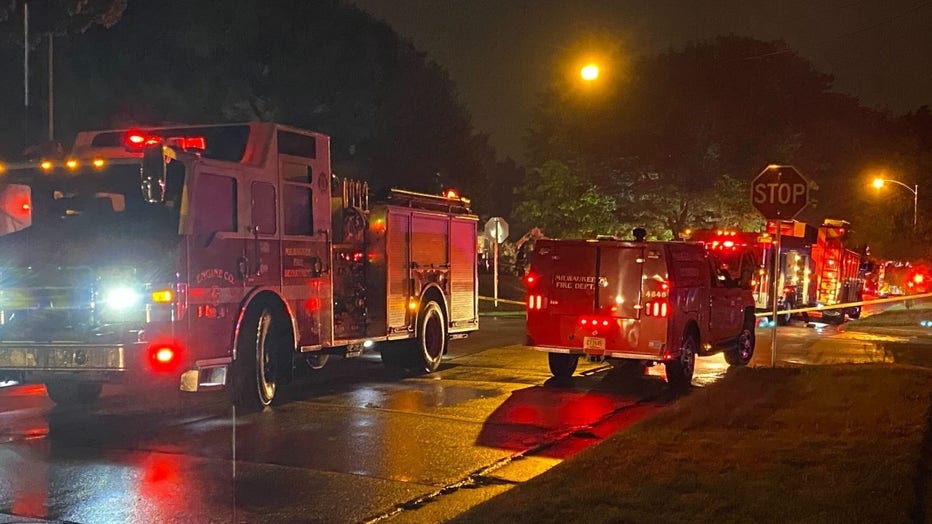 Investigators spoke to a man who said he'd known Rogers for several years, and they had become "reacquainted" a few weeks before the fire. The man said Rogers described Blakney as "crazy" and that he was moving things out of the home.

The man said he got a message from the Rogers' phone number, sent a few minutes after emergency crews were called to the fire on Aug. 25, that said: "You should have left her alone." The man replied "excuse me," to which someone replied, "she dead." The witness said he knew Blakney to go by his middle name, Terrell, so he asked: "This Terrell?" The number answered, "yes," according to the complaint

A witness, who identified Blakney from a photo, told investigators Blakney called him around 5 a.m. the morning of the fire. Blakney said he was "in the woods" and said he was "sorry" – but did not explain why, the witness said. Around 30 minutes later, the witness said Blakney showed up at his home "soaking wet" and bleeding. Blakney changed his clothes and threw his wet clothes away, which police later seized. 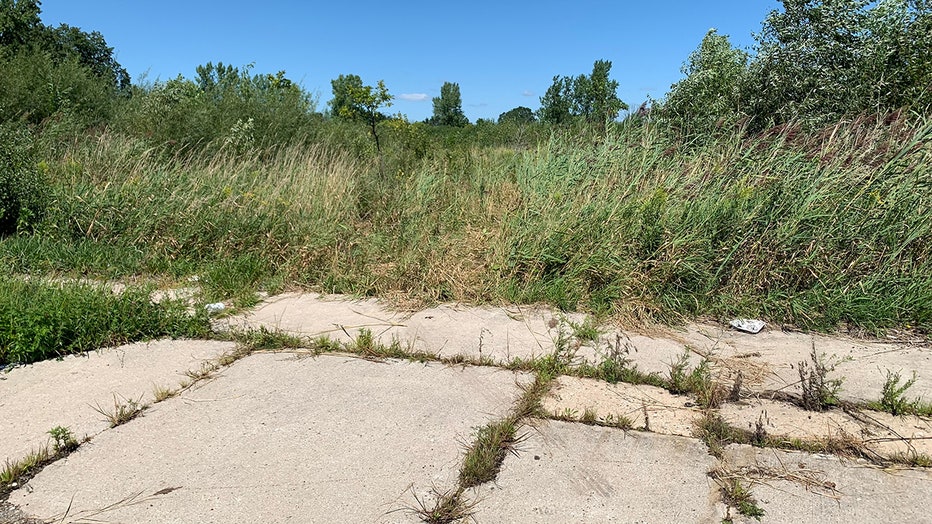 The complaint states the witness asked Blakney why he was sorry, but he would only repeat that he was sorry and that "she made me do it; eventually, Blakney said "I shot her." The witness asked who, and said Blakney responded that he shot Rogers because she was moving out.

The witness later noted Blakney had a gun, per the complaint. Blakney also said, according to the witness, that he had burned his house down and was going to burn his tractor trailers near 76th and Florist. The witness said he tried to calm Blakney down and convince him to turn himself in, but he refused and left.

Based on the witness' statements, police searched a wooded area near Swan and Allyn – roughly seven miles from the scene of the fire. Officers saw tire tracks heading from the road into a field and found Rogers' SUV abandoned roughly 100 yards into the field.

Later, the complaint states, police spoke to a third man. The man told police he was repairing a bulldozer at a construction site near the woods on Aug. 25 and heard "metal collapsing" while he was at his work truck. He went to the back of the truck and saw a man, whom he identified as Blakney from a photo lineup, pointing a gun at him. Blakney demanded the keys to the truck and ordered the man to get inside a trailer, locking the man in from the outside before driving away in the truck. The man eventually forced his way out and called 911. 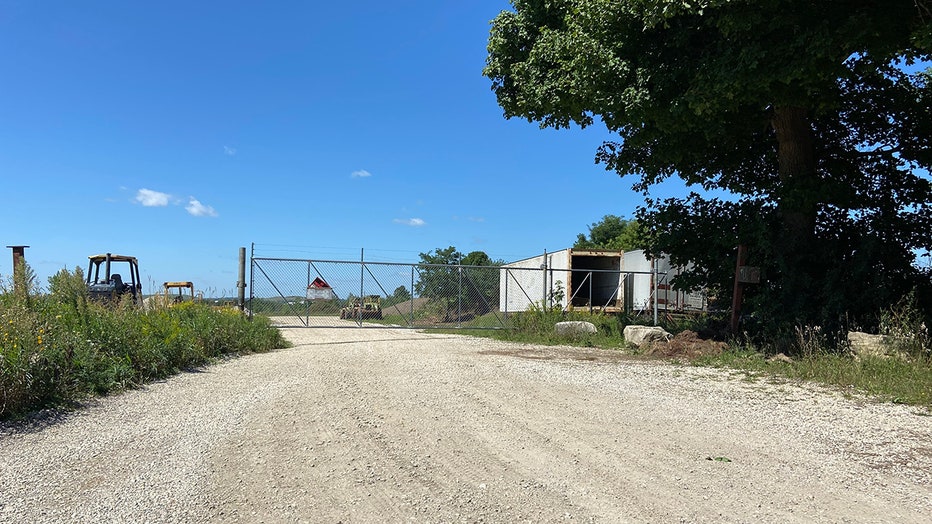 Construction site where worker was forced into trailer at gunpoint

In all, Blakney was charged with:

The complaint states Blakney was previously charged with second-degree sexual assault – accused of having sex with a 13-year-old girl in 2020 – and was released in November 2021 after posting $5,000 cash bail.