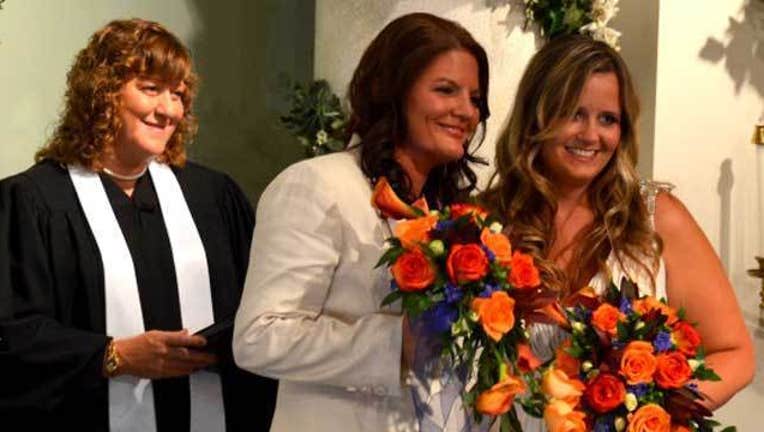 Amy and Holli Petrich were married just after midnight at Mall of America on Aug. 1, 2013. Photo by Greg Kellogg / FOX 9 News.

Minneapolis Mayor Betsy Hodges and St. Paul Mayor Chris Coleman have a joined a list of 224 mayors calling on the Supreme Court of the United States to protect marriage equality for same-sex couples. The amicus brief was authored by the Los Angeles city attorney's office and filed with the Supreme Court Friday morning.

"St. Paul is proud of its long history of fighting for civil and human rights for all people. We share in this responsibility to move our country forward and to stand up for the right of caring, mature adults to love whomever they want, and to display that love through marriage." – St. Paul Mayor Chris Coleman

"We have made a lot of progress here in Minnesota when it comes to recognizing the freedom to marry for all couples, but we're not there yet. There are still couples in our community waiting for the federal government to legally recognize their marriages, and many more in states with zero legal recognition. I am proud to add my name to the growing list of people who believe the Supreme Court should recognize that all people deserve to marry the person they love." - Minneapolis Mayor Betsy Hodges

Rulings in the 6th Circuit Court of Appeals upheld same-sex marriage bans in Ohio, Kentucky, Michigan and Tennessee. The Supreme Court will be hearing oral arguments on those cases in April. A decision on whether or not same-sex couples have a constitutional right to marry is expected by June.

Mayors for the Freedom to Marry

Mayor Hodges and Mayor Coleman are members of Mayors for the Freedom to Marry, a nonpartisan group with a mission the recognize the following principles:

- Excluding a certain class of citizens from marriage undermines the dignity and respect that government owes all its citizens.

- Official recognition of marriage as a fundamental right of all citizens, including gay men and lesbians, is crucial to municipalities and their ability to treat citizens with equal dignity and respect.

- Marriage equality cannot have full meaning unless it is recognized uniformly across state lines.