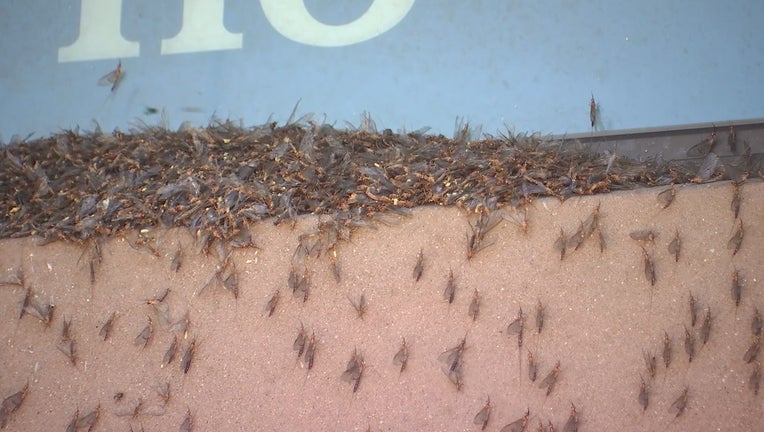 HASTINGS, Minn. (FOX 9) - Areas south of the Twin Cities metro are dealing with bug problems after a massive swarm of mayflies hatched from the Mississippi River.

Videos posted in Bay City, Wisconsin, near Red Wing, show a thick cloud of insects moving through the area. In Hastings, residents are also reporting problems with the bugs.

Mayflies hatch along Mississippi River, swarm cities of the metro including Hastings, Minn.

Parts of the south metro are dealing with bug problems recently after a massive swarm of mayflies hatched from the Mississippi River.

Thursday, things were quiet in Hastings but remnants left behind, including large piles of flies, were evidence of a very active night.

"I got closer and closer and all of a sudden I was like 'oh my gosh, that is not dirt' and I just saw all these bugs and the ones in the pile they’re all clumped up in these huge hills," said Andrea Egan.

It’s what happens this time of year along the river mayflies hatching, reproducing, laying eggs and then dying -- all in about a day.

Andrea Egan got a video of the mayflies at a Hastings gas station and then got out of there.

"I am usually not scared of bugs but I’m like nope, not when they outnumber me," she said.

The City of Hastings is used to what happens here each year and they try to get ahead of the swarm.

"What we do is a proactive step is we turn all the lights off when we have the first inclination of this hatch coming and that does a lot to mitigate or lessen the attraction," said Hastings Director of Public Works Nick Egger.

But some years are worse than others.

"As recently as 2016 we did have to get out our shovels and snowblowers and street sweepers to pick up some pretty large piles and accumulations of them," said Eggers.

So far, it hasn’t been that bad but Wednesday night’s hatch could be just the start.

"Sometimes it’s been one larger hatch," Eggers added. "Sometimes it's been two or three moderate ones. It’s really been all over the board."

While the insects may not be popular, it’s actually a sign of a healthy river as mayflies are found when the freshwater systems have good oxygen levels.