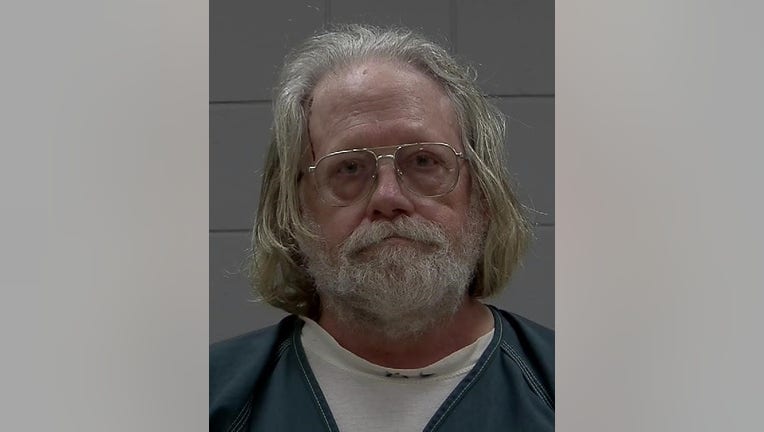 Luke Alvin Oeltjenbruns is charged with four felonies after attacking a Menards employee and a police officer. (McLeod County Jail)

HUTCHINSON, Minn. (FOX 9) - A 61-year-old Hutchinson, Minnesota man has been charged with four felonies after police say he attacked a Menards employee, drove off with an officer clinging to his truck, and struck the officer in the head with a hammer.

Police say a 61-year-old man assaulted a Menard’s employee and struck an officer with a hammer after a mask-related dispute in Hutchinson, Minnesota Wednesday. Video Courtesy:&nbsp;Mason in Hutchinson

According to the criminal complaint, it all started Wednesday afternoon when Oeltjenbruns refused to wear a mask in the checkout line at the Menards in Hutchinson.

When the Menards employee told Oeltjenbruns he couldn't check out without wearing a mask, Oeltjenbruns tried to push his cart past the worker, who stopped him. Then, Oeltjenbruns grabbed from his cart a furring strip, a narrow piece of lumber, and hit the worker. When the employee still didn't let him pass, Oeltjenbruns smacked the worker with his hand about five times in the head.

After the incident, authorities noted a raised, red mark on the left side of the employee's forehead. The worker also told police he had a headache.

Police found the truck and tried to stop Oeltjenbruns in the Walmart parking lot, however, Oeltjenbruns drove slowly away eventually stopping at a red light at South Grade Road and Highway 15 South. When he stopped, officers approached him with their weapons drawn. He rolled down his window and told the officers "that he did not care and to shoot him," the charges state.

Oeltjenbruns ignored commands to get out of the vehicle and drove off, but was later stopped where Hutchinson Police Officer Steven Sickmann had blocked the intersection on Highway 15 and Freeman Ave Southeast. Sickmannn came up to the truck and told Oeltjenbruns he matched the description of the man who assaulted the Menards employee.

When Oeltjenbruns did not comply with the stop, police told him they would "break his window to get him out of the truck if he would not comply," the charges state.

Sickmann then got on the running board of the truck and reached inside. Oeltjenbruns grabbed his arm and closed the window on it, trapping him. Oeltjenbruns started to drive the truck into the squad cars surrounding him until his truck was able to drive through with Sickmann still clinging to the vehicle.

Police however, had the road blocked and were able to stop Oeltjenbruns. Once stopped, Sickmann used a rescue hammer to try to break the window. Oeltjenbruns took the hammer from him and struck Sickmann in the head.

Police eventually arrested Oeltjenbruns. He is in custody at the McLeod County Jail.

Sickmann, a 31-year veteran with the Hutchinson Police Department, went to the hospital and needed eight staples for his head wound. According to Hutchinson police, Sickmann is recovering at home.