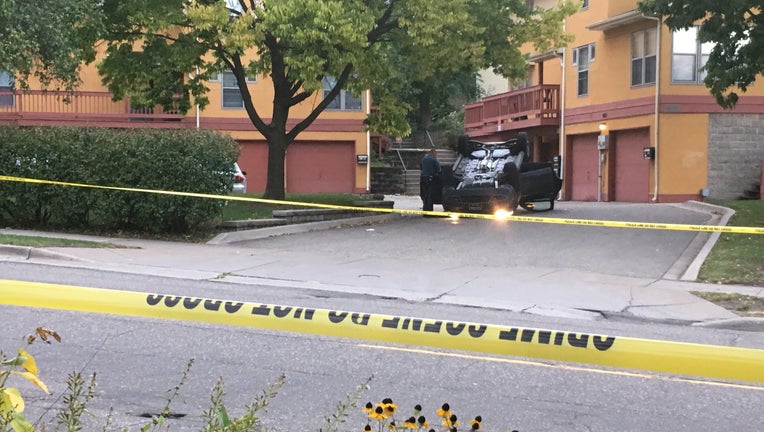 An overturned car lays on its roof at the crime scene on Wabasha Street.

Officers were called around 5:10 p.m. for the shooting on the 400 block of Wabasha Street on a car crash. At the scene, officers found a man and a 4-year-old boy who had been shot inside a rolled-over SUV. Officers say the man had been struck by gunfire in the head and wasn't conscious, but was breathing. The boy had been hit in the foot.

A young boy and man were hurt after a double shooting in St. Paul, Minnesota on Sunday.

The two victims were rushed by ambulance to Regions Hospital for treatment, police said. Jeriko Boykin Sr., 23, died overnight at the hospital. His son, however, is expected to survive.

Officers say they are now working to find a suspect and determine what led to the violence and crash. No arrests have been made.

They are speaking with witnesses and ask anyone with information to come forward. Police say public assistance can help solve this case and help prevent violence in the first place.

"What we do know is people carrying guns in our city illegally are mostly likely to be involved in shootings," explained Sgt. Mike Ernster of the St. Paul Police Department. "What we need is the public's help. If someone knows somebody who's involved with carrying a gun illegally, we want them to contact us before we have our 125th victim."

This was the 23rd homicide in St. Paul this year.

Police say they are working to determine the relationship between the victims. Anyone with information on the case is asked to contact St. Paul police at 651-266-5650.