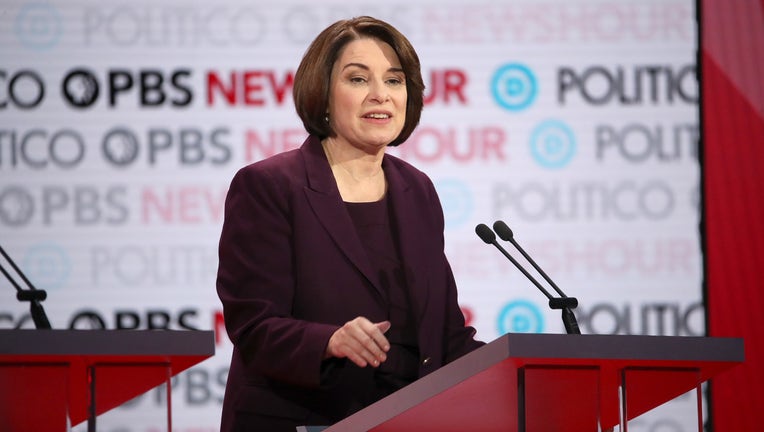 EDEN PRAIRIE, Minn. (FOX 9) - Long discounted as a 2020 presidential longshot, Minnesota U.S. Sen. Amy Klobuchar is making a late push to get into contention in the Democratic primary.

On the debate stage Thursday night in Los Angeles, Klobuchar turned in a performance that political pundits considered her best so far. She spoke the second-most of the seven candidates on the stage, benefitting from restrictive criteria that shrunk the number of debate entries.

Long discounted as a 2020 presidential longshot, Minnesota U.S. Sen. Amy Klobuchar is making a late push to get into contention in the Democratic primary.

Klobuchar forcefully argued that her Midwestern electability made her the best candidate to take on President Donald Trump next year. And she took on the other Midwesterner on stage, South Bend, Ind., Mayor Pete Buttigieg, accusing him of having a light resume.

“I have not denigrated your experience as a local official. I have been one,” Klobuchar said of Buttigieg on stage. “I just think you should respect our experience when you look at how you evaluate someone who can get things done.”

“You actually did denigrate my experience, senator,” Buttigieg shot back. “It was before the break and I was going to let it go because we’ve got bigger fish to fry here.”

“Oh, I don’t think we’ve got bigger fish to fry than picking a president of the United States,” Klobuchar said.

The rivalry between Klobuchar and Buttigieg has been brewing for weeks. The two candidates are fighting for the same moderate Democratic voters, and Buttigieg stands in Klobuchar’s way in Iowa. He has three times as much support as Klobuchar in a Real Clear Politics average of recent polls there.

Earlier this fall, Klobuchar said a woman candidate with Buttigieg’s credentials would not be on the debate stage. Buttigieg is in his second term as South Bend mayor after serving in the military and working at consulting giant McKinsey and Company.

But he lost his only statewide election, for Indiana treasurer, in 2010. And Buttigieg dropped out of the running for Democratic National Committee chairman in 2017 after it became clear he wouldn’t win.

“We should have someone heading up this ticket who’s actually won and been able to show they can gather the support that you talk about of moderate Republicans and independents, as well as a fired-up base,” Klobuchar said, referencing her three statewide wins in Minnesota.

“You want to talk about the capacity to win? Try putting together a coalition to bring you back to office with 80 percent of the vote as a gay dude in (current Vice President and former Governor) Mike Pence’s Indiana,” Buttigieg responded.

“Mayor, if you had won in Indiana, that would be one thing. You tried, and you lost by 20 points,” Klobuchar said.

Klobuchar has slowly risen in recent polls, though she has never cracked the top four and is in a distant fifth place in Iowa. Her campaign has staked its viability on a good result in the Feb. 3 caucuses, and Klobuchar has embarked on a 27-county tour of the state that will take her through the weekend.

The DNC said Friday morning it was raising both the polling and fundraising thresholds to qualify for the Jan. 14 debate in Iowa, the last one before the caucuses. Minutes later, Klobuchar’s campaign said she had already qualified.

Klobuchar has reached the necessary 5 percent in four polls – two national surveys and two in Iowa. Her campaign said it also has the required 225,000 individual donors.

Klobuchar fared well in one instant poll released by the tracking blog FiveThirtyEight.com and Ispos after Thursday’s debate. The poll showed Klobuchar had gained more than any other candidate of the share of respondents who were considering voting for her.

In an interview with FOX 9, Democratic presidential candidate Tom Steyer said Friday that he respected Klobuchar but he would be better suited to seek major change in Washington as an outsider. Steyer, a businessman, got into the race late but qualified for Thursday’s debate.

“I think that she’s somebody who has been a good senator and I respect her,” Steyer said. “You have to ask, who do trust to bring new ideas to Washington to restructure it? Is it an outsider like me who’s talking about term limits for congresspeople and senators of 12 years, who’s talking about direct democracy? Or is it somebody from inside the Beltway?”

Steyer has not made a significant push in Minnesota, unlike fellow billionaire businessman Mike Bloomberg. Bloomberg’s campaign has spent more than $1 million on television advertising in the Twin Cities market alone, federal filings indicate.

Steyer has long supported impeaching Trump, even before the president’s dealings with Ukraine came to light this fall. Trump pressured Ukraine’s leaders to investigate political rival Joe Biden in exchange for $400 million in U.S. military aid and a coveted White House meeting.

A bitterly divided U.S. House impeached Trump along party lines on Wednesday after a three-month investigation. The president has said he did nothing wrong.

“Nobody likes it. But when you see something wrong, you’ve got to fight it,” he said. And when it’s at the absolute core of the country, which is 1600 Pennsylvania Avenue, it’s important.”