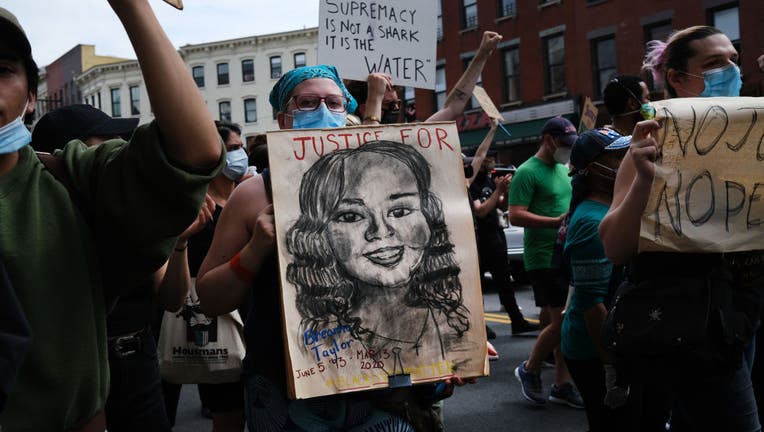 LOUISVILLE, Ky. (AP) - The outcry has reverberated for weeks online and at demonstrations nationwide: Arrest the cops who killed Breonna Taylor.

But three months after plainclothes detectives serving a warrant busted into her Louisville, Kentucky, apartment and shot the 26-year-old Black woman to death, only one of the three officers who opened fire has lost his job. No one is facing criminal charges.

Calls for action against the officers have gotten louder during a national reckoning over racism and police brutality following George Floyd's death in Minneapolis. Officials there are prosecuting four officers involved, including bringing a murder charge against the officer who pressed a knee into Floyd's neck on May 25.

That has left people, from protesters to celebrities, wondering why justice is slow to come in Taylor's case.

“It's definitely taking too long, it's definitely frustrating,” said Kirstia Drury, 32, who joined street protests in Louisville after Taylor's death. “If someone even so much as shot a police dog, they would’ve already been convicted and halfway to prison.”

Breonna Taylor, a 26-year-old aspiring nurse, was killed on March 13 after being shot eight times by Louisville police officers.

“They murdered that girl in her own house,” said Ashley Kidwell, who drove up from Atlanta to join Louisville protests in early June. “We’re going into July, and there’s been no justice served.”

Attorney General Daniel Cameron, whose office is reviewing the investigation by Louisville police, has declined to offer a timetable.

Christopher 2X, a longtime anti-violence activist in Louisville, said the resources put into the investigation by local, state and federal officials has reassured him, and he urged protesters not to get too frustrated with the wait. He's executive director of advocacy group Christopher 2X Game Changers and has often served as a conduit between the Black community and Louisville officials during conflicts. 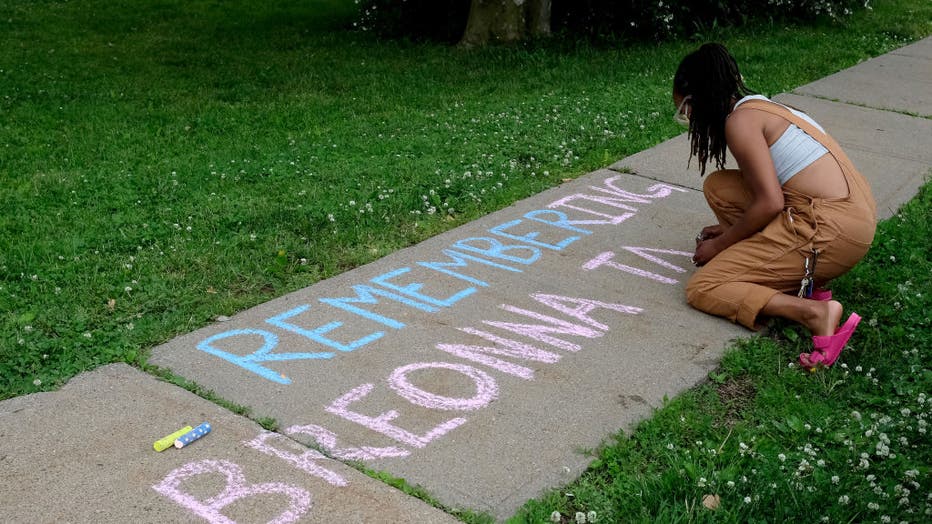 Zoë Pulley writes Breonna Taylor's name on the sidewalk next to Memorial Park on June 5, 2020 in Maplewood, New Jersey. (Photo by Elsa/Getty Images)

“I think the game-changer is the federal intervention here,” he said, adding he's never in two decades seen a racially charged police shooting in Louisville get so much attention from the FBI and the U.S. Justice Department.

He often speaks with Taylor’s mother, Tamika Palmer, who has called for the three officers to be fired and charged in the killing.

“She’s frustrated, she feels grief and pain from the loss of her daughter,” 2X said. “But I constantly remind her how this system works.”

The officers are entitled to due process, and if investigators believe they should be charged, it takes time to build a case that would hold up in court.

Louisville Mayor Greg Fischer has said state laws and the city’s collective bargaining agreement with police require a process to be followed before an officer can be fired.

Police announced Tuesday that Brett Hankison had been fired for violating rules on the use of deadly force. Myles Cosgrove and Jonathan Mattingly remain employed but are on administrative reassignment while the case is investigated.

The narcotics detectives had a search warrant to enter Taylor's home, one of several “no knock” warrants issued by a judge in a drug investigation. No drugs were found at Taylor’s home. No-knock warrants, typically used in drug cases over concerns a suspect could destroy evidence if police announce their arrival, have been banned in a new Louisville law named for Taylor.

A termination letter said Hankison, who is white, violated procedures by showing “extreme indifference to the value of human life” when he “wantonly and blindly” shot 10 rounds into Taylor’s apartment. The letter, written by the acting police chief in starkly personal terms, also said Hankison violated rules against using deadly force.

Taylor was shot eight times. Her boyfriend, Kenneth Walker, opened fire when police burst in, shooting Mattingly. Walker was charged with attempted murder of a police officer, but prosecutors later dropped that charge.

Walker told police he heard knocking but that he didn’t know who was coming into the home and fired in self-defense. Mattingly was shot in the thigh and recovered.