Professional violinist performs for abused shelter dogs to calm them

Violinist Martin Agee has performed with some pretty big names like Madonna and Metallica, but nothing compares to the performance that he gives every few weeks to the shelter dogs at the American Society for the Prevention of Cruelty to Animals’ adoption center (ASPCA) in New York City.

NEW YORK - Violinist Martin Agee has performed with some pretty big names like Madonna and Metallica, but nothing compares to the performance that he gives every few weeks to the shelter dogs at the American Society for the Prevention of Cruelty to Animals’ (ASPCA) in New York City.

Agee has enjoyed a long and distinguished career as a classically trained violinist playing for more than 30 years with notable ensembles including the New York Chamber Symphony, American Symphony Orchestra and many others, according to his website.

Recently, his passion has been performing for the ASPCA’s Animal Recovery Center. The center deals with dogs rescued from abused environments who need help reintegrating with humans.

Many years ago, Agee adopted an ex-racing greyhound named Melody who became family, eventually passing away and leaving a hole that, for Agee, was hard to cope with.

“It was just a very difficult loss for me to get over, and it was really 10 years, and I wanted to reconnect with animals, and so at the suggestion of a friend, I went online and filled out an application with the ASPCA to become a volunteer,” recalled Agee.

One of the jobs he said he looked into was an adoptions counselor, responsible for trying to match a new potential owner with a dog or cat in need of a forever home.

Agee said when he filled out the application to become a volunteer, he jokingly suggested he play violin for the dogs in the shelter after being asked about his profession as a classically trained musician.

He quickly became familiar with the shelter’s Animal Recovery Center (ARC), which helps rehabilitate and re-socialize traumatized animals from situations of severe neglect or any other abusive environment that may require special medical care for the animal to get comfortable with human interaction again.

The shelter says that many of the dogs come in through the organization's partnership with the NYPD as well as the ASPCA's Humane Law Enforcement and Community Engagement programs. 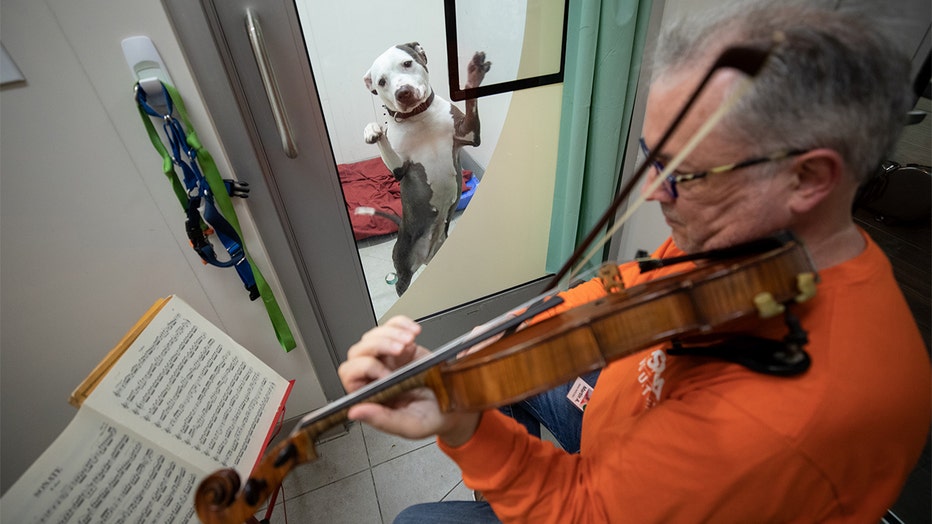 Martin Agee photographed playing violin for one of the shelter's dogs. (ASPCA)

The ASPCA describes ARC as a place where the animals often have varying severities of behavior issues and interactions between the dogs and people like Martin are crucial exposure to people other than just staff to help build trust with humans again.

Agee said it was important to keep the dogs comfortable and most importantly not trigger them, which sudden moves or loud noises were sure to do.

“I spoke to the volunteer department and I said, ‘Well, what would you think about me bringing my violin in and playing for them?’”

He said shelter officials immediately jumped on the idea and so did the dogs.

Agee recalled that on the first day he performed for the animals the reaction to the music was immediate and positive.

“I would walk into a vestibule with three or four kennels and there would be just chaos going on and the dogs are barking, and jumping on the glass, and as soon as I would start playing I would get an immediate reaction,” said Agee.

He added that usually within a minute or two all of them are sitting and listening, with the occasional hound joining in to sing along with the music.

Agee said he tries to get to the shelter to play for the animals a couple times a week, or at least once a week, saying he tries to fit the performances in his schedule whenever he can.

While he said some of the animals enter the shelters in conditions that are sometimes hard to look at, he knows they are in good hands at the shelter and that they rejoice at the sight of Agee and his violin.

"Socialization techniques like storytelling and the musical contributions that Martin provides can increase an animal's chance of adoption by decreasing stress and making them comfortable with new sights, sounds, and people," says Matt Bershadker, President and CEO of the ASPCA

“It’s been so rewarding for me from day one,” said Agee. “The first time I went in I came out in tears, it was just so emotional to see.”

Agee added that while recorded music has been used before as a therapeutic tool for the animals, nothing can replace the live performance — something the dogs certainly agree with.