MIAMI - Sam was downgraded to a Category 3 hurricane on Monday, yet still remained a powerful storm swirling in the Atlantic Ocean.

The storm was centered well offshore from land, located about 745 miles east-southeast of the northern Leeward Islands, the National Hurricane Center said in a Monday morning update. It was traveling northwest at 8 mph.

Conditions were expected to allow Sam to persist as a major hurricane for the next several days, according to the NHC.

Sam had maximum sustained winds of 125 mph, making it a Category 3 hurricane.

"Fluctuations in intensity are possible during the next days, although Sam is forecast to remain a major hurricane through at least Thursday night.," the NHC said. 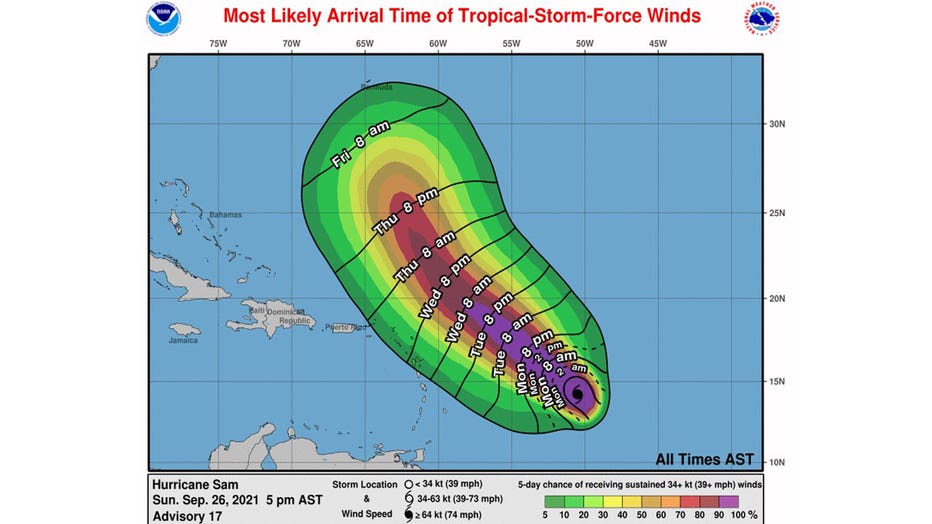 No coastal watches or warnings were in effect, however, swells from Hurricane Sam could cause dangerous rip current conditions off the coast of the Lesser Antilles early this week, and Bermuda and the Bahamas mid-to-late in the week.

While Sam could bring some ocean swell to the U.S. coast, forecasters said it well out to the east thanks to a pocket of high pressure.

"It’s taking that turn to the north. We love to see that," FOX 13’s meteorologist Dave Osterberg said Monday. "Now, the computer models are keeping it east of Bermuda as well, so that would be fantastic to keep it out to sea and it doesn’t impact anybody. While there’s activity in the tropics, there’s nothing imminent in the Caribbean or the Gulf."

Osterberg noted that there are two disturbances just behind Sam, both of which have an 80% chance of development in the next few days.

RELATED: Track the tropics on MyFOXHurricane.com