Tens of millions of older Americans will see a major increase in benefits this January when a new cost-of-living adjustment (or COLA) is added to Social Security payments.

The 8.7% raise is meant to help them with higher prices for food, fuel, and other goods and services. The average recipient will see an increase of more than $140 per month, according to government estimates.

But what does the increase mean for the fund that helps pay Social Security benefits? And what should younger generations keep in mind? Here are some As to some Qs.

How does Social Security work?

When you work, some of your taxes fund Social Security. The government uses those tax dollars to pay benefits to people who have already retired, people who are disabled, the survivors of workers who have died, and dependents of beneficiaries.

How are Social Security cost of living adjustments (COLA) calculated?

The adjustments are based on data relating to inflation.

RELATED: US inflation accelerated in September, keeping pressure on households

To determine the Social Security benefits you will receive, the government calculates a percentage of your highest wages in your top 35 years of earning, and factors in when you choose to start receiving benefits. This year, the maximum allowed benefit for someone who retired at full retirement age, which is 66 or 67 depending on the year you were born, is $3,345 monthly.

When did Social Security begin? 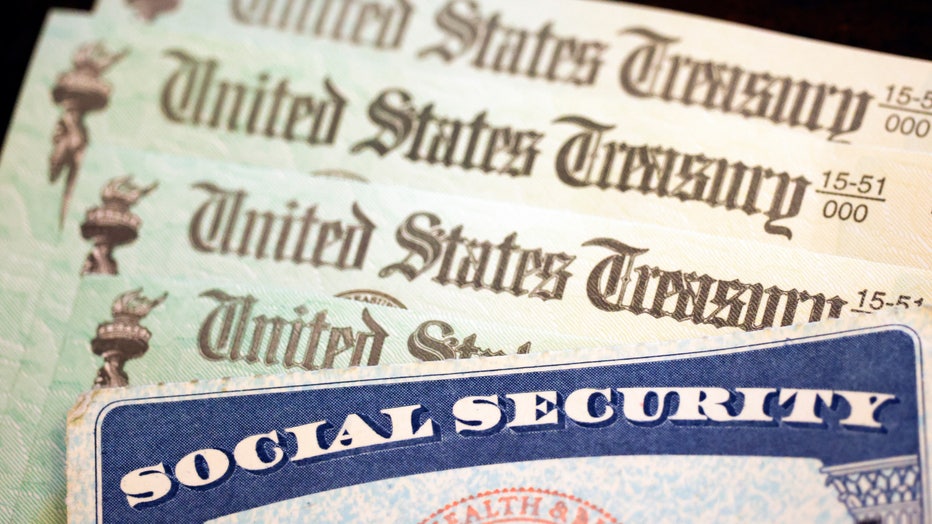 In this photo illustration, a Social Security card sits alongside checks from the U.S. Treasury on October 14, 2021 in Washington, DC. (Photo illustration by Kevin Dietsch/Getty Images)

The Social Security Act was signed by President Franklin Delano Roosevelt in August of 1935. Taxes were collected for the first time in January 1937 and the first lump-sum payments were made that month. Regular ongoing monthly benefits began in January 1940.

The Social Security Act of 1935 was originally named the Economic Security Act, but the title was changed during Congressional consideration of the bill.

Is the Social Security fund running out of money?

According to the latest Social Security and Medicare trustees report, released in June, the fund will no longer be able to pay full benefits beginning in 2035.

READ MORE: Millions of people may still be eligible for COVID-19 stimulus checks, but the deadline is coming up

When the Social Security trust fund is depleted, the government will still be able to pay 80% of scheduled benefits for an indefinite future, the report said, while Medicare will be able to pay closer to 90% of scheduled benefits. That means, if nothing changes, future generations can expect to see a 20% across the board reduction in payments, with a 10% reduction in Medicare coverage.

Kathleen Romig, director of Social Security and disability policy at the Center on Budget and Policy Priorities, a nonpartisan but generally left-leaning think tank, said the COLA increase is "just not a game-changer for Social Security."

"It’s not anything that should cause anyone any alarm," she said. "A year or two years of inflation is not going to change the long-term picture."

Romig noted that the predicted date when Social Security will no longer be able to pay full benefits has historically fluctuated between 2033 and 2035 from year to year, because of various factors.

William Arnone, CEO of the National Academy of Social Insurance, does caution that "the two economic enemies of the trust fund are high inflation and low employment, meaning not only high unemployment but low wages."

"When they hit together, it’s a double whammy," he said.

In that context, a high cost-of-living adjustment can be "bad for the trust fund but great for the beneficiaries."

Ben Storey, senior product manager on the retirement research and insights team at Bank of America, said that many people in their 20s and 30s have a misplaced lack of confidence in the future of Social Security.

"What I hear from a lot of the younger generation is, they really feel like it’s just not gonna be there," he said. "They’re seeing headlines without reading the full story. Even if (the government makes) no changes, they’re still going to get roughly 75 percent of those benefits."

Still, Storey said, it’s prudent for younger people to contribute to retirement and traditional savings vehicles, such as 401(k)s, IRAs, and Roth IRAs.

"Social Security is going to just be one piece of the puzzle," he said.

Storey acknowledged that the same inflation prompting the cost-of-living adjustment for Social Security makes saving more difficult for people in this age bracket, who also frequently contend with student loans, debt, and saving for an emergency fund or down-payment on a home.

What's being done to save Social Security?

Republicans and Democrats have proposed a variety of policy fixes.

Romig, of the Center on Budget and Policy Priorities, said the last time legislation was passed to address Social Security's future was 1983.

"It was bipartisan, and it was a compromise," she said. "Both benefit cuts and tax increases."

Every solution, according to Romig, involves "paying more or getting less," or a combination. "You can't wish your way out of it."

"Lawmakers have many policy options that would reduce or eliminate the long-term financing shortfalls in Social Security," the trustees of the fund wrote in the latest June report. "Taking action sooner rather than later will allow consideration of a broader range of solutions and provide more time to phase in changes so that the public has adequate time to prepare."

"Almost everyone is touched by Social Security," she said. "They’re either paying into it or receiving benefits or they will one day."

"I think young people have an extraordinarily important stake in the system," she added.